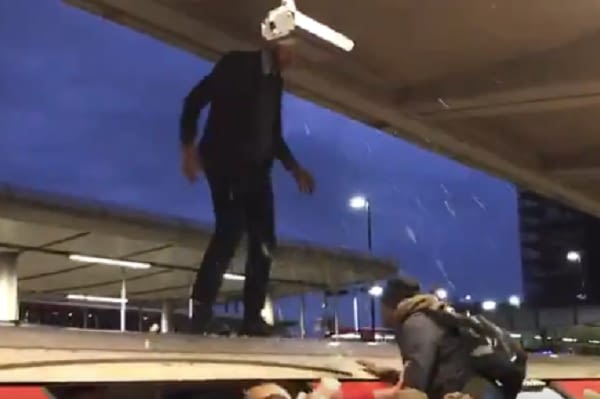 Violent clashes have broken out between commuters and Extinction Rebellion (XR) activists as the group have started a series of protests start across the London Underground.

The Metropolitan Police said activists are “dangerously obstructing” the Jubilee Line and DLR services as activists climbed on top of carriages and glued their hands to trains.

Commuters at Canning Town had enough of XR activists and could be seen shouting and throwing objects at the protesters and one was dragged from the top of the carriage and landed on the platform.

Canning Town tube station this morning, as taken by an ITV reporter.

There is no way that holding up commuters early in the morning in this fashion is going to make them more sympathetic to your aims. Absolutely none.

The Metropolitan Line have urged commuters not to “resort to violence” should they encounter any XR protesters.

Docklands Light Railway announced they have, “Severe delays between Bank and Lewisham / Woolwich Arsenal and between Tower Gateway and Beckton due to an earlier customer incident at Shadwell.

A TfL spokesman said, “We are aware that there are currently demonstrations taking place in the capital, which are causing disruption to the transport network.

“We’re working closely with the police to manage the impact on London’s transport network. We would encourage people to allow plenty of time for their journeys and check before they travel.”

XR are planning a march from 5:30pm on Thursday at the Tate Modern. In a statement XR said, “Following the Metropolitan Police’s decision to ban Extinction Rebellion from the streets of our capital, we are calling upon all London rebels and friends to join us in a march in defence of our democratic right to protest the climate and ecological emergency.

“We are facing the greatest threat to the very survival of life on this planet. This is an emergency, and it demands action.

“We will not be silenced.”