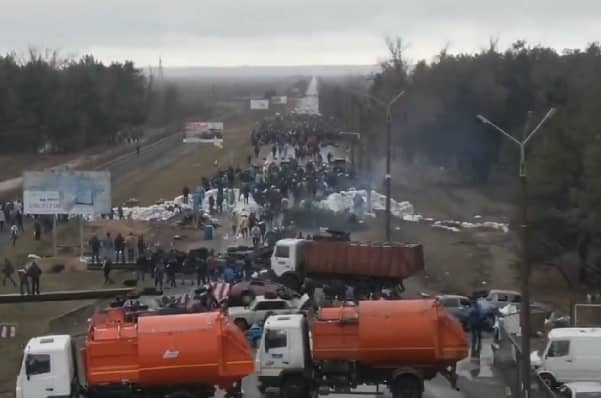 If fighting breaks out Europe has been warned of “another Chernobyl” could happen as the Enerhodar is the largest nuclear power plant in Europe.

The Enerhodar nuclear power plant is being protected by staff and civilians who have blockaded the road to the installation as a “large number of enemy weapons are located near the city.”

The Zaporizhzhia Nuclear Power Station was built by the Soviet government during the 1980s.

Ukrainian civilians are trying to block the entrance to the city of Enerhodar, which hosts the Zaporizhzhia Nuclear Power Plant, the largest in Europe. https://t.co/HGLkdgz5iB

Video footage shared on social media shows that the entrance to the city has been blocked as Russian forces are now close to the area.

The city is 140 miles from Kherson which was captured on Wednesday by Russian troops, Russia’s Ministry of Defence claims.

The city’s mayor Dmitri Orlov said, “This is how Energodar – its civilians – women and men, defend their city. Will continue to defend it.

“Now, more than ever, we need to mobilize our forces, to be together, so that the enemy does not enter the city, which is the largest nuclear power plant in Europe! Let’s be ready, friends!”

A Ukrainian spokesperson said, “Putin’s actions could lead to another nuclear disaster, affecting the entire world.

“The city of Enerhodar, housing the largest nuclear power plant in Europe, is preparing for a battle with the invaders

“If shells hit near the nuclear power plant, they will damage transformers, turbines, and other equipment that ensures the plant’s safety.

“To prevent this from happening, the entrance to Energodar is guarded by the brave station workers and military.”