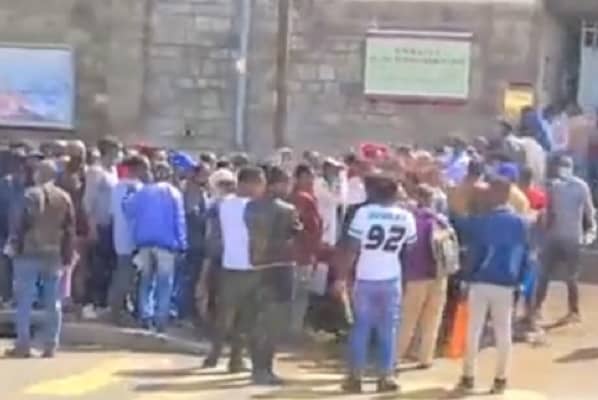 Russia has been accused of recruiting Ethiopians to fight on the frontline in Ukraine as crowds queue up at the Russian embassy in Addis Ababa.

Photos on social media show crowds of people queuing up at the Russian embassy in the Ethiopian capital, Addis Ababa.

The Russian embassy denied the allegation and said that Ethiopians are showing their “solidarity” with Russia.

The Russian statement said in a statement, “We regard it as an another manifestation of the unbreakable bonds of brotherly friendship and mutual support between the two peoples.

“We thank all Ethiopian friends for the kind words they addressed to our country.”

Ethiopians lined up in Addis Ababa’s Russian Embassy to go fight against #Ukraine on behalf of Russia. What a shame, Ethiopia is facing the worst war in recent history, but they want to go fight for Russia. This is madness!@POTUS @SecBlinken @CNNAfrica @BBCWorld
#FreeTigray pic.twitter.com/4Nu8hqdGZg

The embassy added, “it should be emphasized that the Embassy strictly complies with the provisions of its own national legislation and the 1961 Vienna Convention on Diplomatic Relations, according to which recruitment of foreign nationals in the Armed Forces of the Russian Federation is not within the scope of the diplomatic mission’s activities.”

“In this regard, while reiterating our gratitude to all concerned citizens of Ethiopia, we would like to inform that the Embassy does not accept any applications for recruitment in the Armed Forces of the Russian Federation.

“We are confident that the Armed Forces of the Russian Federation have sufficient capacity to accomplish all the responsible tasks assigned to them.”