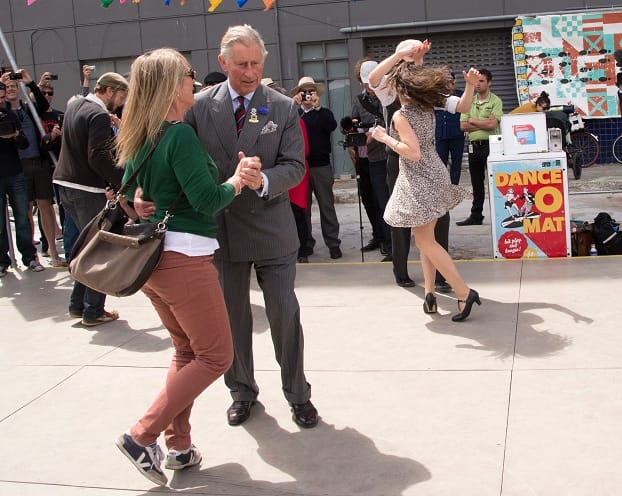 Dancing with the Prince! Charles burns the dance floor in New Zealand

Prince Charles and the Duchess of Cornwall showed off their ballroom dancing skills yesterday at Christchurch, New Zealand. They were visiting Christchurch to meet survivors of last year’s earthquake.

Shall we dance? Lisa Shannon asks Prince Charles for a dance

Spinning around: The Duchess is twirled around by university student Sam Johnson

It all started when the Duchess accepted an invitation from university student Sam Johnson to dance to the sounds of 1940s swing jazz music.

I like to move it, move it: Prince Charles puts his best foot forward

After a few whirls she told the Prince, “Come on darling, you’ve got to dance too.”

But it’s only after psychology student Lisa Shannon asked him to dance, that Prince Charles bust some moves as the crowds watched on.

Royal entertainment: Prince of Waltz shows off his best moves

Shannon said: “If you don’t ask you don’t get, I just saw him standing there looking a bit lonely and I thought I’d ask him to dance.

He led and I followed and I don’t usually follow, but he was definitely in charge.”

The royal couple were visiting New Zealand as part of their Diamond Jubilee tour.

You need to see:

How to dance like Boris: his Closing Ceremony moves, step-by-step