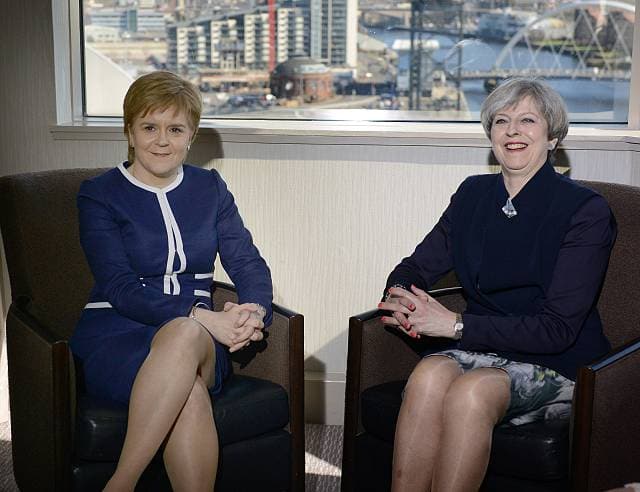 Here’s one of the original pictures taken

MPs have condemned today’s Daily Mail picture of Theresa May and Nicola Sturgeon sitting down next to each other with a headline saying “Never mind Brexit, who won Legs-it!”

The two leaders were meeting in Scotland as Article 50 is to be triggered tomorrow which will start the two-year process of the UK leaving the EU.

Sarah Vine the wife of Michael Gove wrote the headline in her column today.  Ms Vine said that their legs stood out and the “vast expanse on show.”

Ms Vine added: “There is no doubt that both women consider their pins to be the finest weapon in their physical arsenal. Consequently, both have been unsheathed.”

“It’s a studied pose that reminds us that for all her confidence, she is ever the vicar’s daughter, always respectful and anxious not to put a foot wrong.”

“It’s a direct attempt at seduction: her stiletto is not quite dangling off her foot, but it could be. ‘Come, succumb to my revolutionary allure,’ she seems to be saying. ‘You know you want to.”

Jeremy Corbyn tweeted: “It’s 2017. This sexism must be consigned to history.”

The Mayor of London, Sadiq Khan said: “What sort of message does that send girls, young women, thinking about starting a career in politics, if we’re talking about their legs rather than their views on important matters?” he asked.

“The meeting between Nicola Sturgeon and Theresa May was to discuss really important issues and it frankly beggars belief.”

Theresa May’s spokesman said: “We have a clear position that we do not tell newspapers what to put in their pages.”