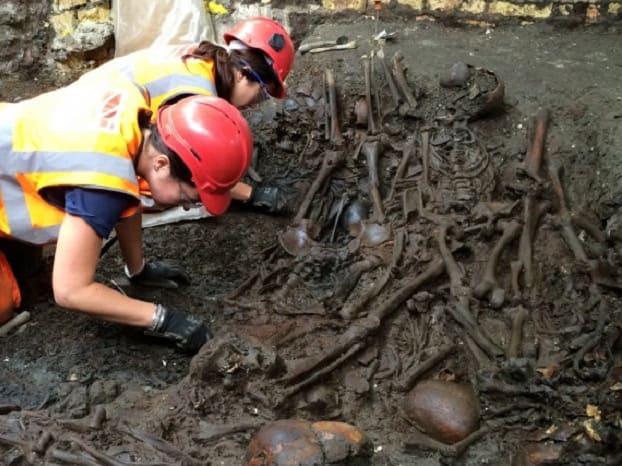 Crossrail is unearthing a lot of forgotten London history as lays railway tracks around the capital.

Yesterday a mass burial site with skeletons of 30 victims of the Great Plague was found in Liverpool Street.

During the excavation of the Bedlam burial ground, archaeologists also found a headstone marked 1665.

Crossrail lead archaeologist Jay Carver said: “This mass burial, so different from the other individual burials found in the Bedlam cemetery, is very likely a reaction to a catastrophic event.

“We hope this gruesome but exciting find will tell us more about one of London’s most notorious killers.”

Mike Henderson, senior osteologist at Museum of London Archaeology, said: “The concentration of burials in this pit provides a new focus for scientific testing and study. We hope detailed osteological analysis will help determine whether these people were exposed to The Great Plague and potentially learn more about the evolution of this deadly disease.”

The Labour Party has caught and banned 1,200 fake supporters

Is the unemployment rate going back up?

Ugh. These are Britain’s filthiest supermarkets