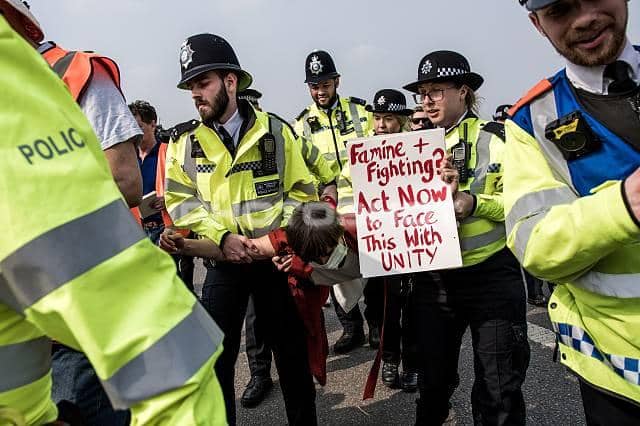 Westminster Magistrates’ Court are preparing to deal with more than 1,000 climate change activists and has set aside two courtrooms for an astonishing 19 weeks, which will costs many thousands of “tax-payers money.”

More than 1,000 Extinction Rebellion activists were arrested across London and thus far, 232 files of evidence have been passed to the failing Crown Prosecution Service (CPS).

The Metropolitan Police said back in May that they will push for all 1,130 of those arrested to face criminal charges, for protesting over climate change that is affecting the world.

Solicitor Raj Chada, from Hodge Jones and Allen who are representing around 300 protesters said this is a waste of money.

Chada said in a statement to the PA, “To prosecute 1,000 people for peaceful protests beggars belief.

“At a time when more and more violent crimes aren’t being prosecuted the CPS has decided to waste taxpayers’s money by dragging all of those arrested from Extinction Rebellion in front of the courts.

“Figures show that around nine per cent of crimes in the UK lead to a criminal charge, yet when it comes to peaceful protesters they are tying to charge 100 per cent.

“The simple fact is that most of those protesters will get nothing more than a conditional discharge or fine.

“How can this amount of court time and money be wasted on this? The priority should be to tackle the climate crisis that threatens us rather than the prosecution of peaceful protesters.”

The CPS said, “We have received 232 files of evidence from the Metropolitan Police relating to the Extinction Rebellion protests in April.

“The CPS is a demand-led organisation and we must review each case referred to us by the police.

“The role of the CPS is to decide whether there is sufficient evidence to prosecute and if it is in the public interest to do so on the merits of each case.”

Financial and business professionals to unite in fight against climate...

London Football Club hits the back of the net with...

Sadiq Khan and Hillary Clinton urge cities and businesses to...