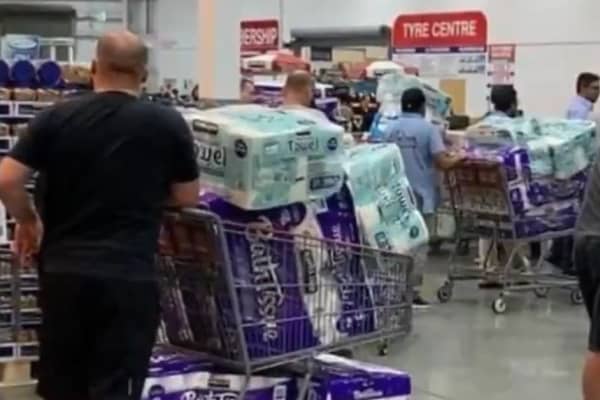 A woman allegedly pulled a knife on a customer after an argument broke out over toilet paper as shoppers emptied shelves over coronavirus fears.

A supermarket staff member told police that a customer was carrying a knife in an aisle, police later cordoned off the toilet paper shelves.

Police in Sydney, Australia said their officers were called to a “disturbance in an aisle” at the Woolworths supermarket.

A witness told Daily Mail Australia: “There was a fight over toilet paper – you could hear a commotion coming from down the end aisle.

“There was a knife pulled and the people started running around.

“It was all over in a few moments, security were here and police came and talked to a woman.”

Woolworth’s is Australia’s largest supermarket and has placed restrictions on the sale of essential items, effectively starting a rationing programme limiting customers to just four packs of toilet paper per shopper.

.@woolworths has begun limiting sales of toilet paper and handwash with coronavirus stockpiling gathering pace. @Kleenex is now manufacturing around the clock with some opportunists flogging the product for $5 a roll. https://t.co/WzFKZ2k76G @NatashaSquarey #Coronavirus #7NEWS pic.twitter.com/xJzF3CHn1b