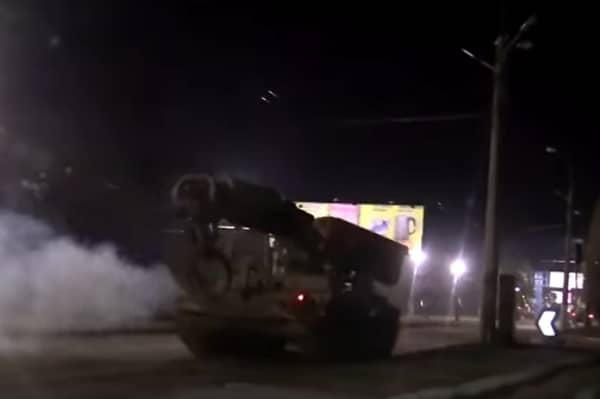 A Reuters witness has reported that columns of military vehicles including tanks and armoured personnel carriers (APCs) have been seen driving through the streets of eastern Ukraine on the outskirts of Donetsk which were not seen in previous days.

Hours after Vladimir Putin signed the decree with the two separatist regions of Donetsk and Luhansk Moscow deployed what they claim to be a peacekeeping mission.

Video shot by Reuters at Makiivka, near Donetsk showed the columns of military vehicles on the roads.

Barbara Woodward, the UK’s ambassador to the UN, told members that sanctions will have “severe and far-reaching consequences” for human life in Russia.

The ambassador said Russia will now see “severe economic consequences for its actions.”

Woodward added, “Colleagues, now more than ever, the council must shoulder its responsibilities for peace and security and defend the principles of the UN charter.

“The council must be united in calling on Russia to de-escalate immediately and condemning aggression against a sovereign nation and defending the territorial integrity of Ukraine.

“Russia has brought us to the brink. We urge Russia to step back.”

Russia’s ambassador to the UN, Vassily Nebenzia, who is also the President of the council said the speeches are a “direct verbal assault”

Nebenzia said, “We remain open to diplomacy for a diplomatic solution, however, allowing a new bloodbath in the Donbas is something we do not intend to do.”

Ukraine’s Ministry of Foreign Affairs said in a statement that by Russia recognising the two regions had “blatantly defied the fundamental norms and principles of international law.”

An EU diplomat told Reuters, “This decision sharply escalates the situation and can mean the Russian Federation’s unilateral withdrawal from the Minsk agreements.

“The Ukrainian side understands Russia’s intentions and its objective to provoke Ukraine. We are taking into account all the risks and not giving in to the provocations as we remain committed to politico-diplomatic settlement of the Russian-Ukrainian armed conflict.”