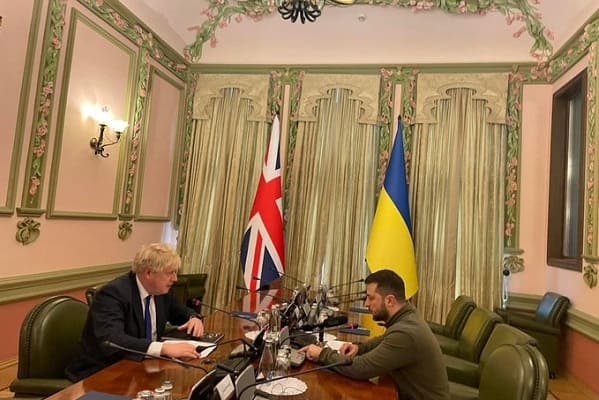 Embassy of Ukraine to the UK
Business NewsPolitics NewsWorld News

The British Prime Minister Boris Johnson has arrived in the Ukrainian capital, Kyiv on Saturday to meet with his counterpart President Volodymyr Zelensky.

Johnson’s visit is to show a display of “solidarity” with the Ukrainian people, according to a spokesperson.

Johnson and Zelensky met to hold a meeting to discuss the Russian invasion and all details have not been shared prior to or after the release of a photograph of the two leaders.

This marks the first time a G7 leader has met with President Zelenksy in war torn Ukraine and it is most likely the pair would have discussed the ongoing war and next steps.

A No 10 spokeswoman said of the visit, “The Prime Minister has travelled to Ukraine to meet President Zelenskyy in person, in a show of solidarity with the Ukrainian people.

“They will discuss the UK’s long term support to Ukraine and the PM will set out a new package of financial and military aid.”

During the press conference Johnson held six weeks ago he warned that the Europe we knew now “no longer exists.”

Johnson added at the times, that Putin had “succeeded in uniting Europe and the whole transatlantic alliance in support of Ukraine and in solidarity with each other.”

Tom Tugendhat, chairman of the foreign affairs committee praised Johnson for the visit, he said, “I’m glad he’s gone. It’s important to stand with our Ukrainian allies right now and show that we are planning a future.”

He added, “I think that sight is one of the greatest sights I’ve seen for a long time. You’ve got the hero Zelensky and [his close friend Boris Johnson] looking at how they take on the tyranny of Putin.

“Standing shoulder to shoulder, our Prime Minister there with the legend that is Zelensky, it just doesn’t get any better than that.”