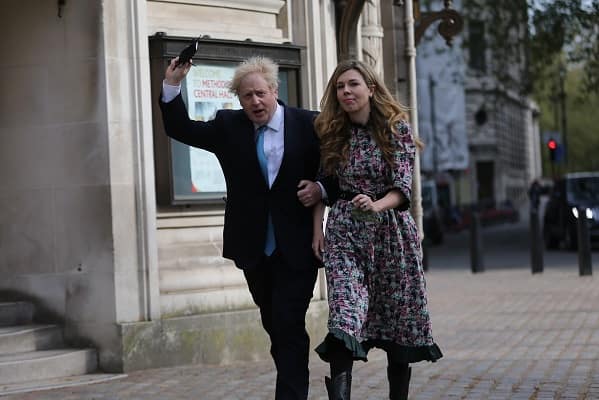 The Prime Minister has now been accused of breaching the 10pm curfew which was in place last year.

Boris Johnson was with his then girlfriend, Carrie and were seen at Darby’s restaurant in central London on 21 October last year, when London was under Teir 2 restrictions.

All pubs, bars and restaurants were forced to close their doors no later than 10pm, and there was also a ban on people mixing with other tables along with diners being told to wear face masks.

The Sun newspaper was told by a source that staff at the restaurant were keen to stick to the laws of London’s 10pm curfew and presented a bill at Johnson’s table at 9.40pm.

By 10pm Johnson was still seated with Carrie Symonds along with their security.

According The Sun, the source added, “Some of the staff were approaching the security, saying: ‘We need to clear the house.’

“The staff were nervous and you could see they were trying to say politely that it was closing time.

“But Boris was deep in conversation and finally left the premises via the emergency exit at 10.25pm.”

It was also alleged that Johnson seated in a private area of the restaurant and was circulating with people in the main dining room, which was against the rules at that time, the source added.

It was further alleged that by The Sun’s source, that some customers were disturbed by his behaviour, it was claimed, and they allegedly complained that Johnson was not wearing a face covering, which was also against the rules at that time.

The Sun’s source further alleged that Carrie’s friends came over to their table at one point to speak with her and the Prime Minister, which infuriated staff at Darby’s.

The source claimed, that is was “one rules for them and another rule for us,” and it is alleged that a staff member spoke to the Prime Minister over their behaviour when London was in Teir 2 restrictions, The Sun claims.

In response, Downing Street said, “It is categorically untrue to suggest the PM did not adhere to curfew rules in place at the time.

“Any small delay would have been for operational security reasons.”