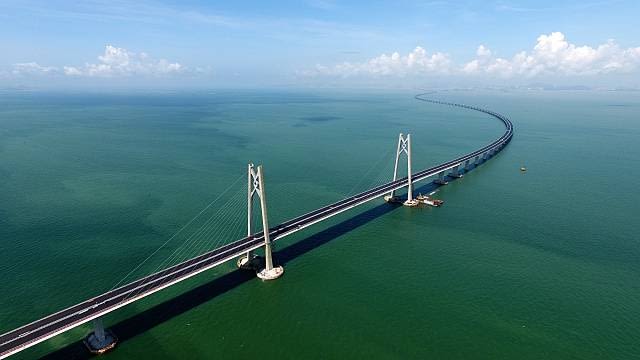 The newly opened bridge, which carries major business significance, is expected to cut journey times between the cities from three hours to 30 minutes.

After 9 years of difficult construction, China's much-anticipated Hong Kong-Zhuhai-Macao Bridge (#HZMB) is slated to open to traffic on Wednesday. Here are five things you need to know about the world's longest cross-sea project https://t.co/f6ZRGlgkgy pic.twitter.com/kYLo8KdvjA

Amazing，the Hong Kong-Zhuhai-Macao Bridge will be opened to traffic at 9 a.m. on October 24, with a total length of 55 km. It is the longest sea-crossing bridge in the world.Proud of our country😘😘😘 pic.twitter.com/VzbucRu9OM

Vice premier Han Zheng has told media that the bridge would help drive China’s strategic blueprint for a “Greater Bay Area” around the Pearl River Delta. “Standing at this new historical starting point, we firmly believe that the opening of the bridge will further develop the special advantage of Hong Kong and Macau,” Han added.

The sea bridge, which has been designed to withstand earthquakes and typhoons, will begin operations from tomorrow.