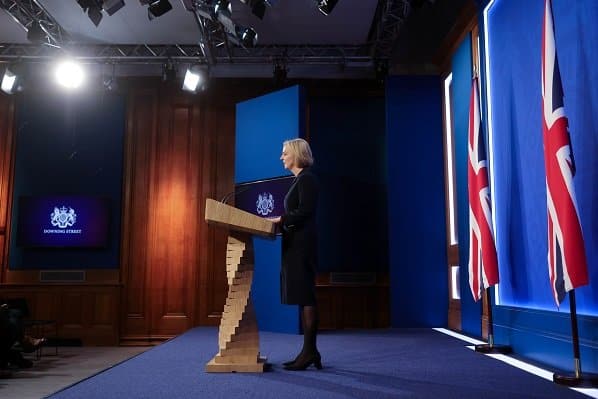 Odds on the Smarkets exchange now say there is an 83% chance that Liz Truss is replaced as Prime Minister this year, an all-time-high probability and up from 56% yesterday.

Smarkets also have a market on whether Truss will be ousted this week, with the odds climbing from 8% after Wednesday’s PMQs to around 25% this morning.

Rishi Sunak is the favourite to take over as PM at a 38% implied chance, with Jeremy Hunt (16%), Penny Mordaunt (15%) and Ben Wallace (8%) rated as the most likely alternatives.

Bettors are not convinced that an impending general election is likely – with a 2022 vote given a 9% chance of happening – however the probability of one taking place in 2023 has been creeping up in recent days and now stands at 31%.

Note: prices do not always add up to exactly 100%.

Matthew Shaddick, Smarkets Head of Politics said, “Based on our odds at Smarkets, Liz Truss’ chances of surviving actually improved somewhat after PMQs yesterday, although they rapidly worsened as news of Suella Braverman’s departure emerged and the evening chaos in the Commons unfolded. There’s now an 83% chance of her leaving before the end of the year and a 25% chance that she’s gone by the weekend.

“Speculation about a successor is now in overdrive with four main contenders emerging: Rishi Sunak (38% chance), Jeremy Hunt (16%), Penny Mordaunt (15%) and Ben Wallace (8%). The prospect of a Boris Johnson comeback is now rated at 5%.

“Talk of a snap general election is not taken very seriously by the betting markets, with the latest odds giving a 9% probability of a 2022 vote, but it’s worth noting that a 2023 election has climbed from 20% to 31% in the past seven days.”