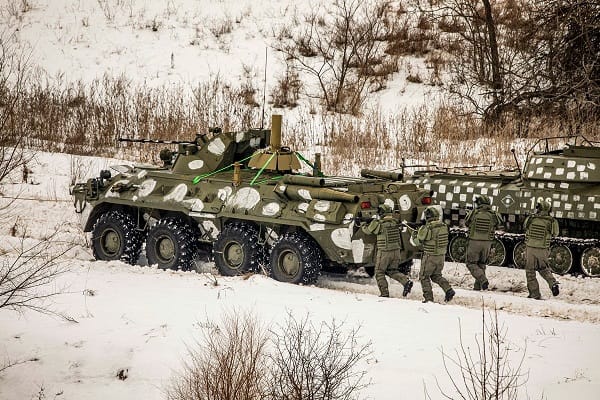 The UK and the US have accused Russia of sending thousands more troops near to Ukraine border despite “false” claims they have withdrawn some soldiers.

The British Armed Forces Minister James Heappey is “very worried” and within “literally minutes” Ukrainian cities could be bombed by Russia.

Heappey backed the US claims that around 7,000 Russian troops are now along Ukraine border with many of them having arrived on Wednesday.

Speaking to the BBC Heappey said, “Troop movements towards the border continue.

“For all the talk about de-escalation in Moscow, I’m afraid what we’re seeing in the opposite and we’re very worried about it.”

He added, “All of the conditions are set, and from the moment President Putin takes a decision, it is literally just a matter of minutes before military effect could be felt in Ukrainian cities.

“That’s different however to inevitability.

“I have a gut feeling because I’m seeing what I’m seeing, and I don’t think you spend that amount of money in putting that number of troops and planes and ships into an area unless you mean it.

“But I have hope that a diplomatic process can succeed, because the consequences of that not being the case are that tens of thousands of people could die.”

The UK’s Lieutenant General Sir Jim Hockenhull, the Chief of Defence Intelligence, added, “Contrary to their claims, Russia continues to build up military capabilities near Ukraine.

“This includes sightings of additional armoured vehicles, helicopters and a field hospital moving towards Ukraine’s borders. Russia has the military mass in place to conduct an invasion of Ukraine.”

The British Foreign Secretary Liz Russ warned it is essential the UK and its allies must not be “lulled into a false sense of security.”

Truss added, “In fact the Russian military build-up shows no signs of slowing.

“We must have no illusions that Russia could drag this out much longer in a brazen ploy to spend weeks more – if not months – subverting Ukraine and challenging Western unity. This is a test of our mettle.”

“This is a very ridiculous situation, there has been hysteria, even hype, fanned for several weeks by our Western colleagues,” he told ITV’s Peston programme.

“They convinced each other and the whole world that Russia was about to invade, they were even naming concrete dates. So it happened in their minds, in their heads.”