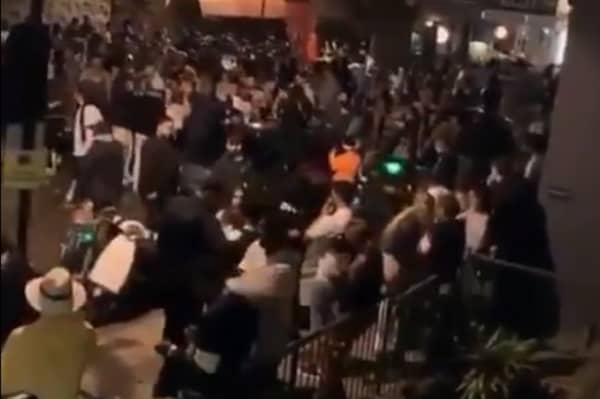 On Friday night police clashed with revellers for a third night after they attended an unlicensed “block party” in West London.

Footage on social media shows projectiles being thrown at police dressed in riot gear with a man telling officers “you’re not coming in.”

Police could be seen swinging a baton at a group of people standing underneath a gazebo in Harrow Road last night.

To quote ‘Drill Rap Newz’ – Feds are getting run out of Harrow Road pic.twitter.com/CAZNcHH2Kx

The Metropolitan Police Commissioner Cressida Dick has condemned the continue attacks on officers as more than 140 have been injured in three weeks.

Police chiefs across England fear there will be widespread drunken disorder when pubs reopen on 4 July, and forces have started cancelling leave.

Police chiefs are said to be furious with the Prime Minister for reopening pubs on what has been dubbed super Saturday.

Forces fear this will lead to a “carnival” atmosphere as the lockdown is lifted on 4 July for the hospitality sector.

Wednesday evening saw riots in Brixton which left 22 police officers injured with two in hospital, and there is worry that summer will see violence erupt over pent up anger of being in lockdown.

John Apter, chairman of the Police Federation of England and Wales said, “I am concerned that we have a pressure cooker building up, a perfect storm. This could just be the beginning.

“t’s everything, people getting more and more frustrated at the lockdown, many young people do not think the pandemic is an issue for them.

“Now many companies are going to start laying people off, which financially is going to be a real challenge for people.

“Add to that what has happened overseas with George Floyd and we have seen protests spreading across the country.”