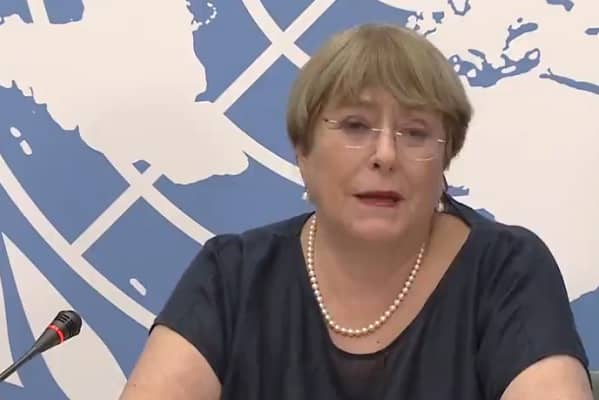 At the end of the summer of 2022, the tenure of UN High Commissioner for Human Rights Michelle Bachelet will come to an end.

The Ukrainian Commissioner for Human Rights Dmytro Lubinets said The next UN High Commissioner should not worry over “nuetrality” and protect human rights.

Lubinets said, “The ‘neutrality’ of international organisations has long been adopted by dictatorial regimes, but since February 24, 2022, these weapons in the hands of the Russian army have killed 5,500 civilians in Ukraine, including almost a thousand children.”

Lubinets said that Bachelet’s “neutral” statements and the creation of various monitoring missions has not reduced the number of victims among civilians in cities and towns.

He blasted that the established missions did not even gain access to Mariupol, Olenivka, or Zaporizhia nuclear power plant.

He added, “The exemplary mildness and inaction of the UN only encourages the enemy to act with increasing cruelty.

“The millions of dollars used daily by the UN human rights bureaucrats do not affect the fulfillment of the mandate entrusted to them.”

He then said that Moscow corrupted most international institutions for the money of citizens of democratic countries.

“This is the money for energy sales that is given to buy positions and votes in the OSCE, the UN or even Amnesty International. Another part of the money goes to propaganda and fake news, and even more goes to weapons to destroy our cities,” he added.

“International institutions must stop being a symbol of only ‘anxiety’ and a call to both sides to honor their commitments. This is our demand to Europe and the world.

“Ukraine has already taken the hit in protection of human rights and democratic values. Everything that the Russian Federation has destroyed in the country, it wants to destroy in Europe: freedom of speech and freedom of assembly, free elections, freedom from torture and slavery.

“And it is the duty of the UN to support Ukraine in this struggle. Or disappear, as the League of Nations disappeared.”