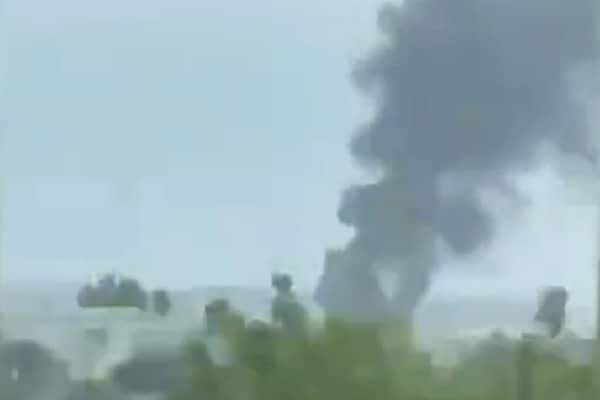 Ukraine has attacked and blown up “two of the most important Russian military airfields” in Crimea and they also targetted a strategic “rail junction.”

Thick black plumes of smoke filled the sky high above the Gvardeyskoye Airbase, following a huge explosion in southern Crimea.

Ukrainian President Volodymyr Zelensky warned on Tuesday that any attack during their independence day, this will be met with a “strong response.”

On Wednesday Russia fired missiles which hit a railway station and a residential area in eastern Ukraine which killed 25 civilians.

The regional official Olexiy Kuleba said on the Telegram channel, that the Vyshgorod region, directly north of Kyiv, was hit in a missile attack with no casualties.

The British Ministry of Defence (MoD) said thick smoke was reported filling the sky from the Gvardeyskoye Airbase, also in Crimea.

Reportedly a #Ukrainian attack on a #Russian installation in Bakhchisarai district in southern #Crimea. pic.twitter.com/JUpqtn40Ld

The MoD said the two areas targeted “are home to two of the most important Russian military airfields” in the region.

They added the rail junction “plays an important role in supplying Russia’s operations in southern Ukraine.”

The MoD said that “Russian commanders will highly likely be increasingly concerned with the apparent deterioration in security across Crimea, which functions as rear base area for the occupation.”

⬇️ ☕² Report
Good day to y'all 👊🏼
Ruzzia is still on 🔥
So what's cookin'☕ today? Passengers of the 🚂 Rostov-Taganrog train are now observing a large 🔥 near the Safyanovo station, Ruzzia ❗
At the end of the video, you can see that the fire got close to the railway tracks. pic.twitter.com/iWwqFx51jY

Last week multiple explosions hit another Russian air base in the city of Sevastopol which was heard by terrified locals.

Something is on 🔥 in the Bakhchisarai district, Crimea ❗
Unknown what it is… pic.twitter.com/wS94qu45zS

Speaking on Times Radio last week, Lieutenant Hodges added, “I noted with some interest and amusement that the tens of thousands of Russian vacationers sitting there in Crimea jammed that Kerch bridge trying to get the heck out of there.

“So, it’s clear that they realise they don’t belong there -they don’t seem willing to actually fight for it.

“None of them were seen heading for the nearest Russian army base saying ‘Hey, I want to help defend the motherland here.

“They were getting out of there as fast as they could.”

Lieutenant Hodges added, “The Russians don’t have anything else with which they can escalate.

“The only other thing they can do is use a nuclear weapon.