The KPMG and REC, UK Report on Jobs indicated that the soft patch in recruitment activity persisted in June as political and economic uncertainty weighed on hiring decisions. The number of people placed into permanent job roles fell for the fourth month in a row, while temp billings expanded at a historically subdued pace. Uncertainty also impacted on vacancy growth, which was stuck close to a multi-year low, and dampened staff availability. Skill shortages fed through to further marked increases in pay.

The report, which is compiled by IHS Markit from responses to questionnaires sent to a panel of around 400 UK recruitment and employment consultancies, showed that hiring activity remained muted in June as permanent placements fell further. Temp billings rose only marginally, to highlight the weakest patch of growth since the current upturn began in May 2013.

Latest data rounded off a disappointing end to the first half of 2019, with the number of people placed into permanent roles falling for the fifth time in six months. Though modest, the decline still marked a stark contrast to the robust hiring activity we saw through 2018, with a number of panellists blaming the fall on political and economic uncertainty. At the same, time temporary staff billings rose only slightly.

Staff vacancies continued to increase during June, though the rate of expansion held close to April’s 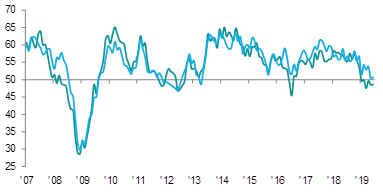 multi-year low. Demand for temporary and permanent staff rose at rates that, though strong, remained weaker than seen on average over the survey’s more than two-decade history.

The total supply of candidates continued to decline sharply in June. According to panellists, a generally low unemployment rate and a reluctance to change roles due to heightened uncertainty led to the latest drop in candidate numbers. The deterioration in permanent worker availability continued to outpace that seen for temporary staff.

Lower candidate availability continued to push up pay for both permanent and temporary workers during June. Permanent starting salaries rose sharply, despite the rate of inflation being among the softest seen for two years, while temp wage inflation quickened to a seven-month high.

IT & Computing continued to lead the permanent staff demand rankings during June. A steep increase in vacancies was also seen for Engineering. The only two sectors to register reduced demand were Construction and Retail.

“As we approach the summer holidays, the worry is that vacancy growth – which held close to a multi-year low in June – is unlikely to bounce back as firms take a relatively cautious approach to hiring. Uncertainty is also likely to further dampen staff availability, as candidates are reluctant to change roles at this time. On a sector basis, IT & Computing continued to need more workers while construction and retail saw reduced demand.

“Looking ahead, conditions across the labour market are likely to remain restrained against a backdrop of political and economic uncertainty before companies can start to make more informed decisions on their long-term hiring.”

Neil Carberry, Recruitment & Employment Confederation chief executive said, “It’s no surprise that the jobs market has slowed a little in this time of uncertainty – but vacancy numbers remain high and there are still opportunities out there for people looking for their next step. Pay is rising too. Nevertheless, the gentle slowdown in permanent hiring and slower growth of temp billings is a reminder to all politicians that businesses and employees across the country are looking for a smooth path to a negotiated Brexit outcome.

“One issue which shows no sign of relenting is the shortage of qualified candidates in some areas, as availability of both permanent and temporary workers remains tight. Roles such as LGV and forklift drivers, healthcare assistants, as well as manufacturing and production staff are consistently listed as being in short supply.

“Agencies employing temporary workers do all they can to train them to fill these vacancies, but this is made more difficult by the constraints of the apprenticeship levy. It is high time that this policy was reformed. By allowing agencies to fund high-quality training for temps using the levy they pay, the government could provide progression opportunities for flexible workers, tackle the country’s skills shortages and boost the productivity of our economy.”