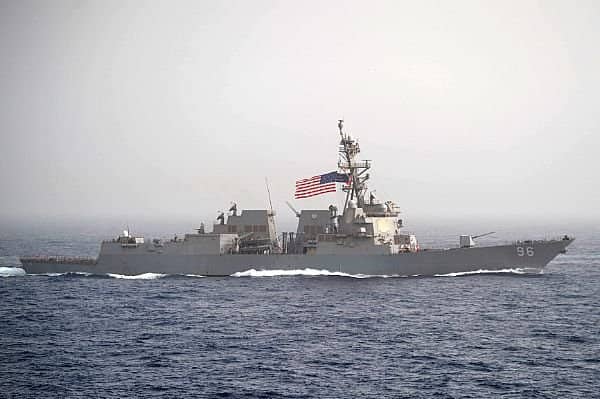 The UK are backing the US assessment that Iran are suspected for two separate attacks on two oil tankers on Thursday in the Gulf or Oman, the British foreign secretary has said.

Jeremy Hunt warned the Iranian capital Tehran, if it is proven they are behind the attacks it would be a “deeply unwise escalation which poses a real danger to the prospects of peace and stability in the region.”

A fifth of the world’s oil travels through the region as a result the attacks sent oil prices soaring on Thursday, closing up 0.95 points to 7,368.57, whilst a barrel of Brent Crude jumped 2.6% to 61.53 US dollars.

The US military released a video on Friday morning that shows an unexploded limpet mine being removed from the sea next to the oil tanker, Kokuka Courageous.

Video recorded by U.S aircraft of an IRGC Gashti-class patrol boat removing an unexploded limpet mine from M/T Kokuka Courageous. Courageous suffered an explosion while in #GulfofOman. Her 21 crew members were rescued by #USNavy destroyer #USSBainbridge. https://t.co/YpiEUALHWj pic.twitter.com/rjWKJN0qcf

Tehran rejected the accusations made by the US Secretary of State Mike Pompeo; they are responsible.

Pompeo said on Twitter, “These attacks are a threat to international peace and security, a blatant assault on the freedom of navigation, and an unacceptable escalation of tension by Iran.”

However Iran’s foreign minister, Javad Zarif, hit back on Twitter and said the US had “immediately jumped to make allegations against Iran without a shred of factual or circumstantial evidence.”

Hunt told the BBC, “This is deeply worrying and comes at a time of already huge tension. I have been in contact with Pompeo and, while we will be making our own assessment soberly and carefully, our starting point is obviously to believe US allies.

“We are taking this extremely seriously and my message to Iran is that, if they have been involved, it is a deeply unwise escalation which poses a real danger to the prospects of peace and stability in the region.”

GULF OF OMAN , June 13, 2019 —
The Arleigh Burke-class guided-missile destroyer USS Bainbridge (DDG 96) responded to a distress call from the M/V Kokuka Courageous in the Gulf of Oman the morning of June 13. https://t.co/TVOdAgfDWK pic.twitter.com/qDIAZBRApa

More than hour passed, and the aircraft saw one of the IRCG boats pull in a raft from the Altair. According to Centcom, the IRCG ordered the vessel that had rescued some of the sailors to turn over them over.

Centcom further said, the crew of the Kokuka Courageous had “abandoned their ship after discovering a probable unexploded limpet mine on their hull following an initial explosion.”

Later the crew were taken to the USS Bainbridge after they were rescued by a Dutch tug.