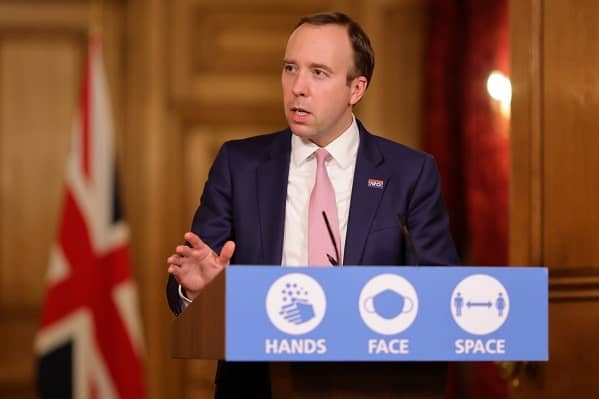 The Health Secretary, Matt Hancock has said on Monday that he refuses to rule out a third national lockdown as virus cases are soaring.

The UK has seen more than 50,000 cases for the sixth day in a row as of Sunday and Minister’s are uder pressure to plunge England into a national lockdown.

On Sunday the Labour leader Sir Keir Starmer called for a third national lockdown, and he said it should be done within 24hours.

“And it means that whereas the old Tier 3 was able to contain the old variant, that is proving increasingly difficult in all parts of the country.”

He was then asked if Tier 4 restirctions work, he replied, “It is down to people’s behaviour, frankly.

“What matters is, yes of course, the rules that we put in place, but it is also about how people act. And frankly what I would say is this: it is critical that everybody in the country does all that they can to reduce the spread of the virus.”

This comes as the Prime Minister, Boris Johnson warned on Sunday that restrictions across England are “probably going to tougher” as infections rates are now the highest ever recorded.

He told the BBC that regional restricitons could be required within weeks and said that Ministers must be “realistic” over the soaring spread rate of the new mutant variant.

Speaking on the BBC Andrew Marr programme on Sunday morning he said restrictions might be coming in the “weeks ahead,” refused to comment over the prospect of Tier 5 being introdcued.