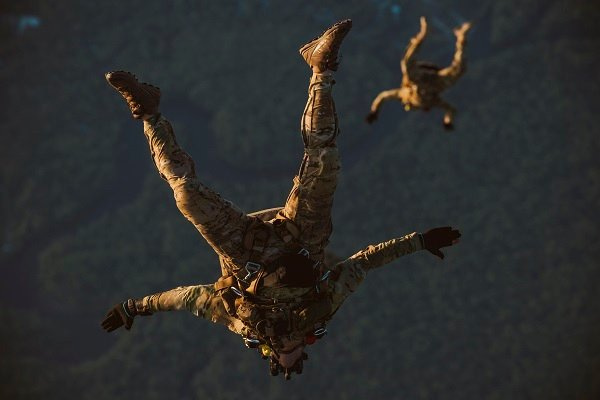 French paratroopers from the 11th Airborne Brigade have conducted a surprise military exercise in Estonia, the French Defence Ministry confirmed.

More than 100 paratroopers were deployed in Estonia which borders Russia on Tuesday night in “Operation Thunder Lynx” which was “enabled, at very short notice” with “the dropping of about 100 paratroopers.”

The 11th Airborne Brigade parachuted “over an area secured by Estonian soldiers” which was executed as an act of “strategic solidarity,” sending Russia a firm message.

The French Defence Ministry said, “The airborne operation illustrates the ability of the French armed forces to intervene, in emergency, and support an allied country.”

France deployed in May an air defence system to Romania so that NATO “can ensure protection to the forces operating within the area.”

As part of NATO’s Rapid Reaction Force France sent around 500 soldiers to Romania to bolster forces on the eastern flank.

The French President Emmanuel Macron said that they are committed to “defend Europe as war is being waged again.”

Estonia warned on Wednesday that Russia are “simulating missile strikes against NATO territory” as Europe is preparing for war.

Estonia said that in a highly provocative move Russia violated their airspace for the first time in a helicopter which was fully armed.

A senior Estonian civil servant said, “Getting over the border with a helicopter cannot be a mistake – there have been multiple examples in recent days.

“Beside the border actions, there have been provocative actions flying very near the vicinity of the border in the last few days.”

He added, “It is real life. They are actually simulating missiles attacks against NATO territory and letting us know that they are doing this.”

Inflation remains the most important issue for Britons, as public...

Unlikely Putin will be ousted in a ‘coup’ as no...

Europe warned by Russia to prepare for the...

Millions of gig workers will be able to...

Millions of Brits will be offered the chance to get instant access to their salaries thanks to an exciting, new partnership. Data experts Unveel.io and London-based multi-channel voucher distribution platform borofree.com are …