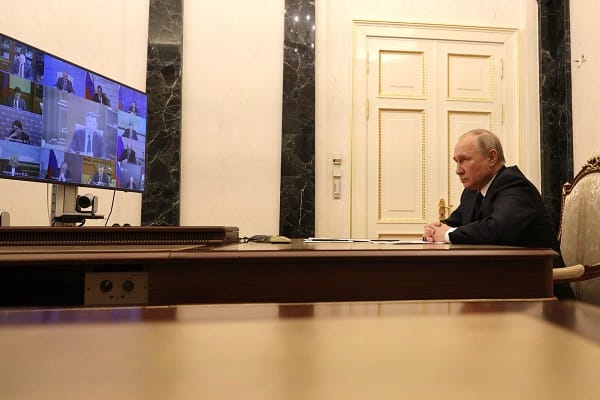 A former British diplomat Sir Kim Darroch who previously served as the National Security Advisor had the task of telling Vladimir Putin to “stay away” from the Queen’s state funeral.

The Kremlin despot was among a few other problematic world leaders who were not invited to Queen Elizabeth II’s state funeral.

Sir Kim who was also the UK permanent Representative to the European Union explained why it was “not right” to invite the Kremlin dictator.

Sir Kim told Times Radio: “Putin of course also paid a state visit… I think in 2003, shortly after he took over the presidency of Russia.

“There is a difference with Putin, he’s invaded another country and has caused the destruction, a semi-destruction of a country.

“And the death of tens of thousands of people, there is a line that’s been crossed with Putin and so I think that is different.

“And I think it was right not to invite him.”

The Kremlin hit back and then accused the British of settling “settle scores with our country.”

Russia described the decision not to invite Putin as “profoundly immoral” and “blasphemous.”

Then in an act of vengeance Putin then attempted to discredit the Queen by releasing a “fake” video of the late monarch purporting to show Her Majesty throwing scraps of food to African children.

Even after her passing, Russian state media continues to malign Queen Elizabeth. State TV host Olga Skabeeva falsely claimed that the offensive footage depicts the queen, when in fact it was filmed sometime between 1899 and 1900, decades before Queen Elizabeth was born. pic.twitter.com/XNJDTSYiE8

Russian TV presenter Olga Skabeeva said, “To understand what Queen Elizabeth was like. This footage shows the Queen in her younger years.

“And this is how she gave food to the children of the enslaved people in Africa.

“Just look at that kindness. As though they were animals in a zoo.”

Skabeeva added, “This video embodies the way the West and Anglo Saxons behave towards everyone else in the world.”

Fake History Hunter wrote, “That’s not ‘the Queen’ and those are not African children.

“These are two French women in French Indochina (now Vietnam) at least two decades before Elizabeth II was even born.

“They’re also not throwing food but little coins on a string.”