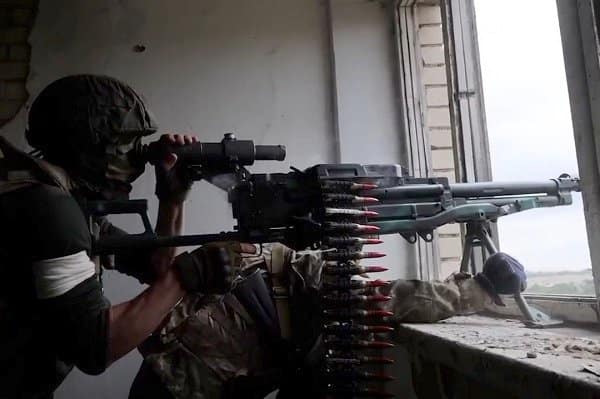 Vladimir Putin has been urged to “create an international coalition” which is “necessary” to challenge NATO and to win in Ukraine.

A close of ally of Putin said that the coalition should include countries such as Iran, North Korea and Serbia for instance and the Russia should not “deny themselves” of this “pleasure.”

The top Russian propagandist Vladimir Solovyov said, “I also consider it necessary for us to create an international coalition.

“I don’t understand why the Americans always cobble together an international coalition.

“Why are we denying ourselves that pleasure?”

He added, “There are units in Syria very well trained by us, there are people in Africa who support us.

“If volunteers from all over the world are going and fighting in the DPR corps, why shouldn’t we give them the opportunity to organise and create an international corps?

“Dating back to the era of the war against fascism in Spain, when for the first time the International Brigades came up against Nazi Germany which was fighting on the side of Franco, that practice has existed.”

Putin’s ally concluded, “Why should we stop people who want to take up arms and go?

“Why should we stop our Serbian brothers? Some of them are fighting now anyway in the DPR corps. That’s my layman’s option”.

The UK army chief Sir Tony Radakin told the BBC’s Sunday with Laura Kuenssberg, “At the very outset, we said that this was a strategic error by President Putin and strategic errors lead to strategic consequences.

“Putin is failing in all of his military strategic objectives.

“He wanted to subjugate Ukraine —that’s not going to happen. He wanted to take control of the capital — we saw that that was defeated earlier on.

“We saw that he wanted to weaken NATO, NATO is now much stronger, and we have Finland and Sweden joining. He wanted to break the international resolve.

“Well, actually, that strengthened over this period and he’s under pressure.”

He then warned against seeing Ukraine’s advance as a “turning point,” he cautioned, “It’s going to grind on for a long time.”

“I think we’ve got to be very cautious,” Sir Tony added.

“But people need to be cautious that the likely result with all of this is that it’s going to grind on for a long time.

“There’s a wistfulness when people jump to conclusions that either president Putin is weak and his power base might be undermined, or that Ukraine has gained some ground —and it’s been magnificent action in the northeast — but it doesn’t automatically lead on to easy victories elsewhere.”