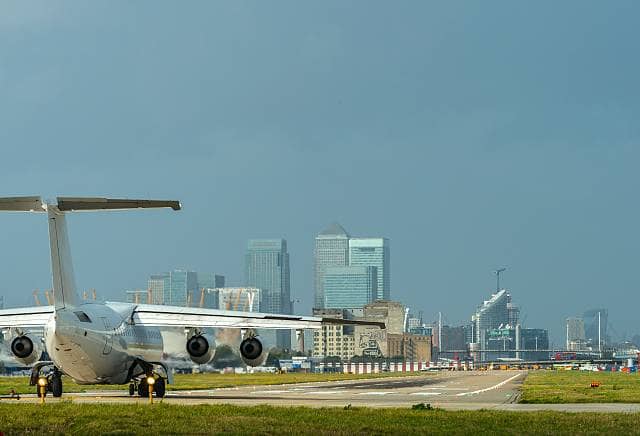 Extinction Rebellion (XR) protesters have started their three-day protest at London City Airport blocking the entrance as well as the CLR station.

A spokesperson from the airport said, “We can confirm that a number of protesters have arrived at London City Airport.

“We continue to work closely with the Metropolitan Police to ensure the safe operation of the airport, which remains fully open and operational.

“As of 09:15 there have been over 60 flights which have either arrived or departed.

“If you are flying from London City today, please check the status of your flight with your airline before travelling to the airport.”

Extinction Rebellion said they want to launch a “Hong Kong style” blockade at the airport until Saturday.

The airport is being targeted over their planned £2bn expansion as the group say it contradicts the governments plans to be carbon net zero by 2050.

Current scene at London City Airport where Extinction Rebellion are occupying one of the entrances pic.twitter.com/gxFIaF0MU2

XR said, “This will be our biggest mass participation action during the rebellion and this nonviolent disruption will send shockwaves around the world and set a new global precedent for direct action.

The group added, “Wherever we land, we will construct our ’13th site’ – bringing food, water, tents and sleeping bags to make sure we can continue holding the airport and keeping it closed for a full three days.

Police were seen forcibly dragging protesters from the main entrance, the airport has enforced a strict entry policy for ticket holders only.

XR spokesperson Rupert Read said, “London City Airport is planning to roughly double its numbers of flights. It is located in a highly built up area meaning that its flights cause a lot of noise-misery as well, of course, as climate-deadly pollution.

“It is used disproportionately by private jets and by financiers, businesspeople and other members of the polluter elite flying in and out of the City of London, when often they could do what they need just as well by using digital telecommunications.

“This has to stop and Extinction Rebellion are here to stop it.

“If we the people are to have any chance at all of saving our civilisation from Climate and Ecological Collapse, we must first stop making things worse. Air travel is an icon of our fragile ‘just-in-time’ economic system.

“That system will break, as Climate Chaos hits. By non-violently shutting down this airport, in homage to the style of the Hong Kong democracy protesters, we are demonstrating the utter frailty of the transport systems that countries such as ours, unwisely, have come to depend upon.”