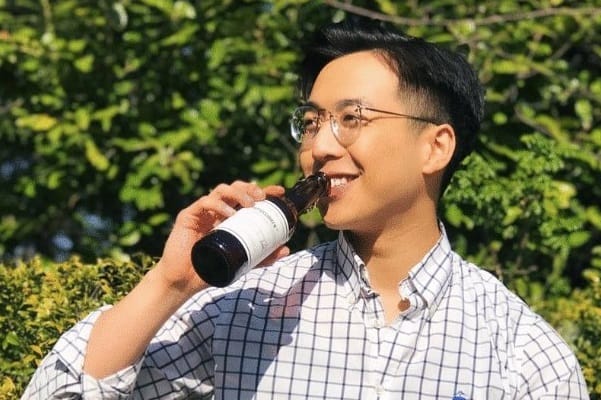 Mark, who moved to the UK from Hong Kong when he was only 13 and was unable to speak any English, went on to study philosophy at Durham University.

From the age of 18 he developed a real love for beer and even started taking multiple professional industry exams. However, Mark’s passion took a knock when he was diagnosed with alcohol induced liver damage and was advised to give up alcohol completely.

Not wanting to give up his beloved beer Mark tried hundreds of non alcoholic beers, but whilst enjoying the taste it left him asking ‘what’s the point?’ Mark didn’t just enjoy the taste but the relaxing effect alcoholic beer gave him at the end of the day.

He just wasn’t getting the same effect from the non alcoholic alternatives. Mark made it his mission to find a healthier way to unwind without alcohol. He found the solution when he went back to Asia and discovered a whole new world of functional plants his ancestors would use for medicinal benefits.

Inspired by this discovery he began brewing beer in this university room using these ingredients. Two years later IMBOSSIBREW was born – beer brewed with plants to help you unwind without the alcohol.

The lager is refreshingly crisp with a hoppy palate, contains only 66 calories per can and is packed full of active nutrients that support relaxation, without the drowsiness. Less than six months into his business journey Mark was invited to pitch his business to the BBC 1 Dragons Den Panel after winning several start up awards.

After a detailed pitch unfortunately none of the Dragons offered any investment into the business commenting Wong was ‘too early into his business journey’ and ‘There was too much competition in the Industry’ On the experience Mark comments… “It was a great learning opportunity. I never thought I’d be on Dragon’s Den, let alone being invited to pitch – for that I’m extremely grateful.

“The comments from the Dragons were very constructive and I didn’t regret a single moment in the Den.” We’ve only just begun the journey to change the way we drink – and I can’t wait to show them our progress in 3-5 years.”

Since walking out of the Den empty handed Mark has secured almost double the investment and value pitched to the Dragons with two independent Angel Investors – one of whom is a FTSE 250 CFO.

The company itself has grown by 930% since launch in 2020 with multiple sell outs and has won a gold award at the European Beer Challenge beating. Mark has since launched a wildly popular Hazy Pale Ale and has extensive plans to expand to the US and further before 2023.

In addition to the results Mark achieved on his own after filming the show within 24 hours of the show airing IMPOSSIBREW had locked in £100k in sales and beaten it’s 2022 sales forcast To top off the sales success they also secured over 700 investors who pledged £2.4 Million.

On this huge success Mark said, “We were driven by the dream to create the best alcohol alternative and didn’t expect to resonate with people so much.

“We almost had 6-figures in orders just this weekend alone and 680 investors decided to go against the Dragons and signed up with £2.4m in funding. This has been beyond my wildest dreams and we can’t wait to make more exciting beers!”