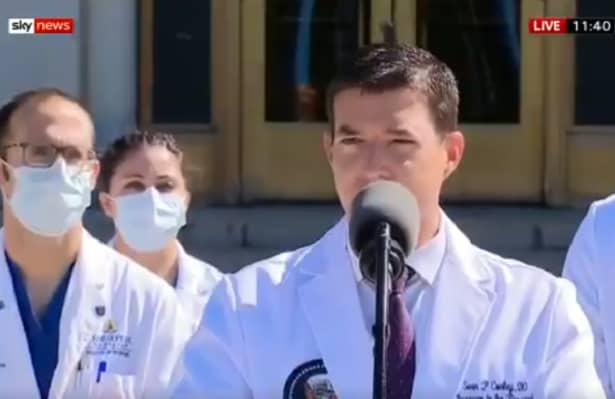 The US President Donald Trump’s top physician, Dr Sean Conley has told a press briefing on Saturday that “the President is doing very well.”

Dr Conley said that he is “pleased with his progress” and that he is receiving outstanding care, and is being monitored closely for any complications.

He confirmed that Trump is “not on oxygen” and he “is in good spirits.” Dr Conley said that President Trump will receive five days of Remdesivir and that he has been “fever free for 24-hours.”

On Thursday and Friday Trump “did have a fever,” but at “the moment there is no cause for concern.”

The Dr said that “at this time, the team and I are extremely happy at the progress the President has made,” and he has not “experienced any difficulty breathing.”

According to the medical team, “Trump told doctors he feels like he could walk out of medical centre today.”

However, insiders said that his condition is now “serious,” and that the President was suffering with a fever, severe fatigue and nasal congestion that has left him struggling to breathe.

White House staff are said to be keenly aware that patients with the virus can see their condition suddenly take a “serious” turn for the worse.

CNN quoted a government advisor as saying that there is a “reason for concern” as Trump had “trouble breathing,” and added that his situation “is serious” and the President is “very tired, very fatigued.,” but in “good spirits.”

Trump is seriously overweight and classed as obese, he is 74-years old, likes to eat a lot of cheeseburgers and is in the high “at risk” category for serious complications from virus.