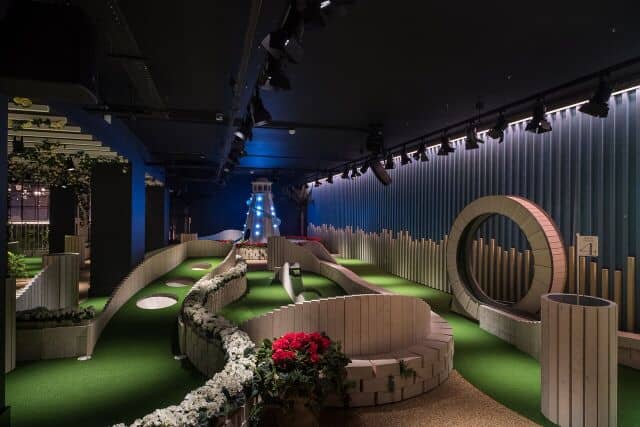 The Institute of Competitive Socialising, a London-based leisure focused business, has opened its second Swingers crazy golf site in the capital following £3.5 million in funding from Santander Corporate & Commercial.

Swingers West End is located in the 20,000 sq ft site of the former BHS flagship store near Oxford Circus. Based around a 1920s English Riviera theme, Swingers West End contains two nine-hole golf courses, two bars and a range of private hire space which can accommodate groups of up to 300 people. Food is provided by Made of Dough, Patty&Bun, Breddos Tacos and Hackney Gelato.

Founded by Jeremy Simmonds and Matt Grech-Smith, the Institute of Competitive Socialising first showed the Swingers indoor crazy golf concept as a pop-up venue in Shoreditch in 2015. Following its success, Swingers City opened in 2016 as a permanent venue next to the Gherkin in the City of London.

Matt Grech-Smith, Co-Founder & Managing Director, The Institute of Competitive Socialising, said: “We are delighted to have received funding from Santander to open Swingers West End. At the Institute of Competitive Socialising, we are constantly striving to create the most enjoyable day or night out that you can have under one roof. With Swingers West End I think we’ve come one step closer: our location, immersive décor, street food, drinks, crazy golf and service all combine to make an unrivalled level of fun.”

Tavia Sparks, Director, Santander Growth Capital, said: “We are delighted to have provided financing to the Institute of Competitive Socialising to take their hugely popular Swingers concept to London’s West End. We look forward to working with Matt, Jeremy and the rest of the management team to achieve their growth aspirations over the coming years.”