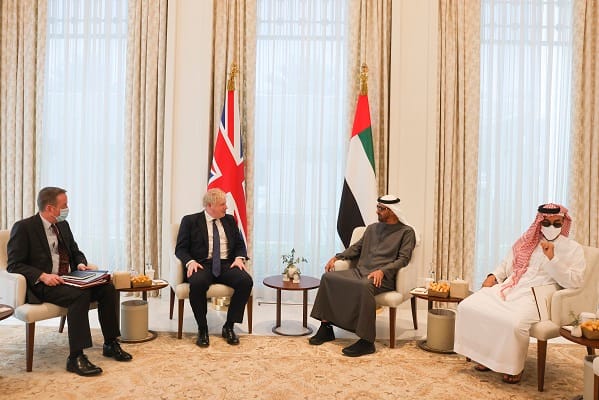 The British Prime Minister Boris Johnson is in the Gulf to end the West’s “addiction” to Russian oil and gas to stop Western “economies” being held to “ransom” by Vladimir Putin.

Johnson is increasing his efforts to stop Putin from gaining billions in revenue through their income of fossil fuels amid the invasion by Russia into Ukraine.

Johnson told broadcasters at the Emirates Palace hotel in Abu Dhabi, “When we look at the dependency the West in particular has built up on Putin’s hydrocarbons, on Putin’s oil and gas, we can see what a mistake that was because he’s been able to blackmail the West and hold western economies to ransom – we need independence.”

Johnson will set out the energy strategy next week, which will include a “massive jump forward on renewables, more nuclear, using our own hydrocarbons more effectively” which will end all trade of oil and gas with Russia.

The British Prime Minister tweeted on Wednesday to confirm Saudi Arabian investment in greener energy in the UK, Johnson said, “Great news that Alfanar Group is investing £1 billion in the Teesside Lighthouse Green Fuels Project, creating hundreds of jobs to produce sustainable aviation fuel from waste, with the potential to reduce emissions by 80% compared to their fossil fuel equivalent.”

Ahead of his arrival in the UAE, the Prime Minister said, “The brutal and unprovoked assault President Putin has unleashed on Ukraine will have far-reaching consequences for the world, well beyond Europe’s borders.

“The UK is building an international coalition to deal with the new reality we face. The world must wean itself off Russian hydrocarbons and starve Putin’s addiction to oil and gas.

“Saudi Arabia and the United Arab Emirates are key international partners in that effort.

“We will work with them to ensure regional security, support the humanitarian relief effort and stabilise global energy markets for the longer term.”