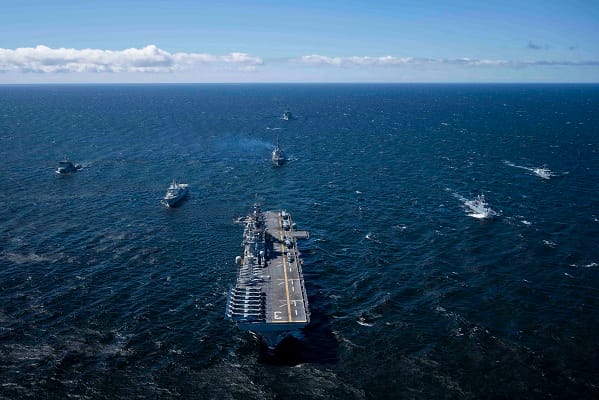 Officially, Russia is only targeting Ukraine in its “special military operation,” but Baltic States feel they have everything to fear from Russian ambitions.

In order to avert the threat, Estonia, Latvia and Lithuania have already ramped up their military potential and spending, and plan to go further still.

And NATO has carefully implemented “reassurance measures”, with increased interactions and rising military presence. Will the Baltic States be silent observers of the Russian invasion of their neighbor?

Or are they next in line as potential military victims of the onslaught?

Naturally, this question has been on Baltic minds since the invasion, as most inhabitants of Lithuania, Estonia and Latvia can still remember the days of when Moscow ruled over them with a heavy hand. Those fears are not only the makings of post-traumatic perspectives.

Russia is indeed eager to get their old influence sphere back, with their economic and military standing somewhat stabilized, at least until cards were reshuffled with the Ukrainian invasion.

Analyst Robin Emmott writes that: “84.6% of Latvian respondents to a Benu Aptiekas/Gemius poll in May said they were highly anxious about Russia’s invasion.”

Baltic States have reasons to worry

As Russia, in many ways, is just recovering from its 90’s collapse, tackling major opponents is not yet an available option. Targets are therefore naturally closer, smaller and weaker nations – which puts Baltic states right in the center of the target.

For this reason, Baltic States have been strongly relying on their NATO membership, and the security it provides. Ever since their integration in 2004, Baltic States revealed themselves as energetic partners, and spontaneously addressing the looming threat of hybrid warfare, namely with the creation of Tallinn’s cyber-warfare excellence center, and Riga’s Stratcom center.

Quick reforms were implemented to strengthen and adapt their military apparatus to NATO, which responded with sizable reinforcements to the small but effective allies.

1700 combat ready troops were placed in Estonia by Britain, and the US has sent added units of F-35 fighter jets, AH-64 attack helicopters, and nearly 1,000 troops.

Baltic States beefing up their forces

Awareness of the risk, combined with the Ukrainian illustration of Russia’s territorial ambitions, have naturally led Baltic States to increase their defense budget.

Reporter Tim Stickings writes: “Latvia plans to raise its military budget and invest in recruitment and air defence in a response to Russia’s attack on Ukraine that will make it one of Nato’s most prolific spenders.

“Ministers in the Baltic country signed off a plan to spend 2.5 per cent of its gross domestic product on defence — a proportion bettered only by the US, Greece and Croatia in the latest ranking of Nato’s 30 members. It makes Latvia the latest Nato country after Germany, Denmark, Norway and others to commit to spending more on defence after the war in Ukraine upended the European security climate.”

Estonia, on the other hand, increased its defense budget by over 500 million euros, following the Ukrainian invasion. Finally, Lithuania has beefed up its defense spending to 2.5%, to a sturdy 1.2 billion dollars. All three countries aim to acquire adequate military equipment for the specific threat at hand, namely aircraft, infantry vehicles and artillery systems.

Given the heightened threat, Baltic countries have already started shopping for security systems and armament. All of the new types of equipment have commonalities worth noting, namely their up-to-date design increasing their relevance and capacity to survive on the modern high-intensity battlefield.

Estonia has received, from its US partner, a fleet of Hi-Mars multiple rocket launching artillery, which Russian forces know are deadly, as they encounter them on the Ukrainian battlefield. The system comes within a package, totalling over half a billion dollars.

Analyst Raul Gonzalez writes: “The bulk of the deliveries of HIMARS systems to Estonia will consist of around 160 ‘pods’, which carry a payload of up to six missiles in each. These weapons have a range of up to 200 kilometers and precise radar guidance and other sensors to direct the warheads to their targets, according to a DSCA press release.”

Lithuania has already received and fielded the European Boxer Infantry fighting vehicle, in 2019, as part of their military reinforcement of Eastern Europe.

Defense News Jen Judson writes: “Lithuania received its first round of a unique variant of the Boxer infantry fighting vehicle last month— equipped with Israeli-made anti-tank guided missiles and an American-made 30mm cannon — making it the most powerful version of the German-manufactured vehicle.”

Every Infantry Fighting Vehicle in Russia is track-and-armor, something which provided troops with survivability and domination capacity, 30 some years ago.

As recent fighting has shown in Ukraine, modern tank-busting infantry weapons easily pierce through armor, regardless of thickness. Lithuanian Infantry vehicles, thanks to their design, can evade threats which their Russian counterparts can no longer survive.

As far as fire support is concerned, the French Caesar artillery system, already received by Ukrainian forces, is a promising lead for the Baltic nations, who have no hope of matching Russia’s number, and therefore endeavor to outmaneuver and outpunch the enemy.

Lithuania ordered 18 units from France in June, in order to strengthen the German PzH 2000s already in operation. The Caesar also departs with the hull-and-track design used by most self-propelled artillery, and trades its heavy armor for superior mobility with a 6×6 or 8×8 wheelbase.

The firing solution is equivalent to all other top-tier howitzers (including Russian ones) but the Caesar’s firepower-mobility mix will mean that the Russians will pay a heavy price against elusive Baltic howitzers, in an artillery duel.

Defense News published earlier this year, “This choice of CAESAR was recommended by General Valdemaras Rupšys, Lithuanian Chief of Defense Staff, in April.

“Lithuania plans to equip the artillery battalion of the “General Motiejus Pečiulionis” brigade which is currently equipped with 54 American M101 105 mm towed guns of American that were transferred by Denmark to the Lithuanian army in 2002.”

Like the Hi-Mars system, the Caesar is able to strike both far (with a range of up to 40 kilometers – or 25 miles) and accurately (with intelligent ordnance such as Excalibur shells). The howitzer, which has performed both tactically and commercially, is therefore a promising candidate for the European NATO members whose artillery is due for renewal, such as Bulgaria or the Czech Republic.

Latvia reinforced its infantry’s mobility and firepower last year, with the acquisition of over 200 Patria Infantry fighting vehicles. Based on a modern design, the Patria has also ditched the track-and-armor configuration and bases its survivability on tactical agility.

Given the size of the perceived threat, Lithuania, Estonia and Latvia are keen to ask for more. Requests for other types of advanced weaponry have been sent westwards, but have not received a favorable response as of yet.

The equipment requested ranges from F-35 fighter jets to entire divisions of troops, but NATO is careful not to further provoke Moscow. Requests for HiMars rocket artillery systems and integration inside the Iron Dome are also awaiting replies.

The types of equipment which Baltic states have already started acquiring – and plan to acquire -are an indication of what we can learn from the most modern type of fighting, ongoing in the Ukraine: for the foreseeable future, fighting will be a mix of technological sophistication and ruggedness, highly kinetic and mobile.

If Central European States can hope to evade the Russian army but still hit it hard, it has a chance to keep Moscow’s troops at bay.