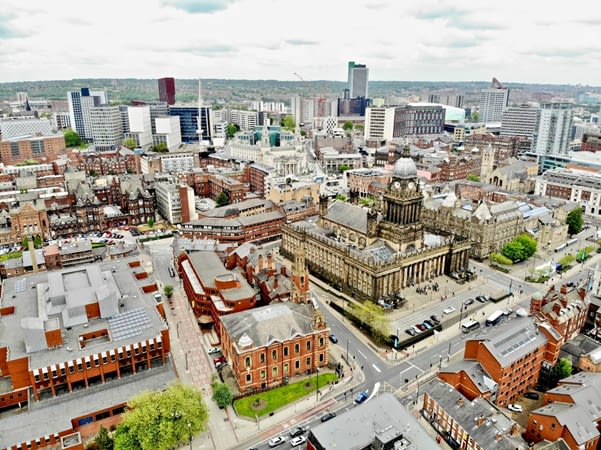 A city with an 800-year-old history, Leeds is front and centre of the Northern Powerhouse initiative and it shows. Property prices are rising, innovative developments are springing up in the city centre and beyond. Channel 4 are moving in, the student population is surging, and the city is now home to one of the most exciting tech hubs in the UK. For property investors, property investment in Leeds offers plenty.

Property investment in Leeds: a city with a growing economy

Leeds is located in the West Riding of Yorkshire. And, while many people think of it as ‘up north’ (which it is), it’s centrally located with easy access to London by train and the motorway network to anywhere else in the country.

The city centre is at the heart of a wider region that boasts an economy worth more than £64.6 billion per year. And it’s growing fast. Local government figures show that the economy of Leeds grew by just under 40% between 2009 and 2019. Naturally, this is boosting jobs, increasing the number of professionals moving to Leeds, leading to a higher proportion of public to private sector jobs than any other UK city outside of London.

Leeds City Council figures show 119,000 separate businesses in the wider region, all powering the £64.6 billion annual economy. The city of Leeds itself is responsible for £21.3 billion of this amount, clearly showcasing its credentials as a thriving centre for business.

Leeds boasts the third largest total of jobs against other local authority areas. More than 32,000 businesses thrive in Leeds, including around 6,000 small and medium sized enterprises (SMEs), which are crucial for a thriving economy. The city also has significantly more medium and large businesses than the national average.

Big businesses with more than 1,000 staff based in the city include BT, Yorkshire Bank, Ventura, First Direct and Asda Group. One of the most significant and important moves within the media sector comes with Channel 4 selecting Leeds for its new northern base. A huge coup for the city’s burgeoning media sector, Leeds City Centre will welcome Channel 4 in the last quarter of 2020. This is boosting property sales, as new buyers are entering the market.

As well as giving London a run for its money as a financial and business services hub, Leeds is generating £1 billion from an impressively sophisticated tech sector.

Due to the thriving job market and a booming student population in Leeds, an ever-increasing demand for high-quality housing has led to a deficit. This is affecting rents and property prices, with the latter expected to grow 19.9% by 2022. Rents are also predicted to increase by around 18.8% by 2022.

The wider Leeds City region is home to a working population of 1.37 million people, among a total population of 3 million. And by 2029, the Leeds economy is expected to grow by 21%. Leeds City Council expects around half of this to be generated by the financial and business services sectors.

Almost £4 billion has gone into investments for large scale developments since 2009, with more than £7.3 billion worth of construction going on right now. Property investment in Leeds is increasingly important to the UK’s economy, and the city centre is becoming the heart of the wider Leeds region.

The property market in Leeds is continuing to outperform London, with sales increasing and prices holding firm. The average price of a house in Leeds is just over £215,000, with an average sale price of £208,000. Figures show an increase of 4% on prices for apartments and flats since 2018. Compared with prices in London, which have dropped by up to 5% in some areas over the same period, Leeds is showing a strong sales market.

An array of exciting developments across Leeds are drawing the attention of property investors. Channel 4’s Leeds HQ will be in the Majestic building, a landmark city centre building. Oliver Ramsden, director of independent property advisory Aspen Woolf says: “We can expect this move from Channel 4 to boost the local economy in the same way the BBC did in Salford, Manchester. It’s a sign of Leeds’ place as a media hub and is a hugely positive coup for the city.”

HMRC is also relocating 6,000 civil service positions to Leeds. This will have a massive impact on the office market in Leeds, and a knock-on effect on property. All of which drive projects such as the South Bank regeneration, which is one of the biggest in Europe. It will incorporate the long-awaited HS2 railway station, which will facilitate the journeys of 60 million passengers a year and create tens of thousands of new jobs by 2050.

Springwell Gardens is an example of the high-level, luxury developments forming part of the South Bank development, as the city provides accommodation for the burgeoning population. Due to open in 2021, Springwell Gardens will stand out architecturally on the Leeds skyline – a marker for a new era for Leeds.

The future couldn’t look more promising for property development in Leeds. A diverse population, blossoming job market, growing international reputation for technology, business and financial services, and a strong pool of talented graduates every year, combine to form one of the most exciting cities in the country.

Aspen Woolf are an award-winning independent property advisory, specialising in identifying wealth building opportunities in both the UK and internationally through smart, safe and secure property investments. Aspen Woolf are a member of The Property Ombudsman. They have been trusted by investors worldwide for over 14 years. https://aspenwoolf.co.uk/