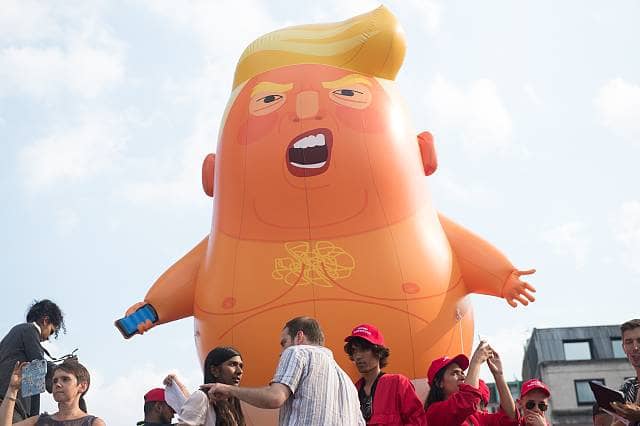 Anti-Trump protests planned for London during his state visit

President Donald Trump is expected to arrive in London for his full state visit in June, anti-Trump campaigners have promised to flood London during his visit.

On Tuesday demonstrators started coordinating mass demonstrations in London ahead of his planned state visit.

The President of The United States of America, President Donald J. Trump, accompanied by Mrs Melania Trump, has accepted an invitation from Her Majesty The Queen to pay a State Visit to the UK. pic.twitter.com/e3ANW9bUKa

In 2018 when Trump came to the UK more than 250,000 protesters flooded London, he has been slammed for his approach on climate change and immigration.

The National Police Chiefs’ Council estimated the cost of the policing operation in 2018, cost almost £18m as 10,000 officers covered the visit.

It seems Extinction Rebellion (XR) protesters are to join anti-Donald Trump campaigners, Jayne Forbes of XR said the Mall is the “obvious spot” to demonstrate.

Forbes added, “We may be there to try to engage him in understanding that climate change is an emergency and the US is one of the biggest emitters of greenhouse gases in the world.

“He has a duty to act. He needs to be aware of what’s happening in his own country.”

Shaista Aziz, from the Stop Trump coalition said, “This demonstration isn’t just about Trump as one man. He is a symbol of the new far right, a politics of Islamophobia… and walls and fences that are growing around the world.”

The speaker of the house of Commons, John Bercow has been urged to allow President Trump to address Parliament when he visits the UK in June.

Lord West, the former Navy chief told the Telegraph, last week it would be an “absolute disgrace” if Bercow does not allow Trump to address Parliament.

He said, “The US and Britain saved Europe from a very dark time in its history and without America we would not have beaten the Nazis.

“Many Americans gave their lives on D-Day and beyond, and it would be disgraceful not to allow President Trump to speak.

“He is the elected US president, he is representing the US in that context, they are a key part of Nato and our most important ally.”