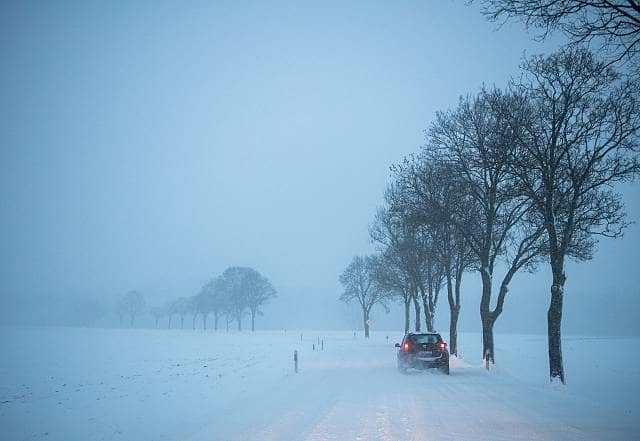 Cold air from the Arctic is heading to the UK with -12C temperatures and heavy snow is to blitz northern areas of Britain today.

The BBC’s long-range forecast added the cold air is being pushed to the UK from the Arctic, which could bring more snow by the of the month.

The BBC forecast said, “Through mid-January the weather will turn unsettled and begin to become rather changeable, with some highly variable temperatures expected for the next few weeks.

“This is due to the colder Arctic air being displaced into Scandinavia and Russia from the polar vortex.

“This air will occasionally feed into the UK, bringing some colder than normal days mixed with days of milder sub-tropical air pushing in from the southwest.

“As we head later into January and early February, there is a growing risk that the cold outbreak will become more widespread and longer-lived.”

“Most of the snow is across northern England and Scotland while the Midlands, southern and south eastern England have got rain. The west is drier and milder.

“Through the rest of the day we’ll see the rain turning increasingly to sleet and snow into the Midlands, East Anglia and possibly high ground in the south east.

“North east England can expect disruption with 10-20cm of snow possible over high ground. Western parts of the country will be drier and with just a few showers.

“Tomorrow will be mainly dry with sunny spells. Late in the day cloud and rain will push back into western Scotland and Northern Ireland.

“A very cold day across northern Britain where temperatures stay at or below freezing all day again. Even western areas will be colder tomorrow.”