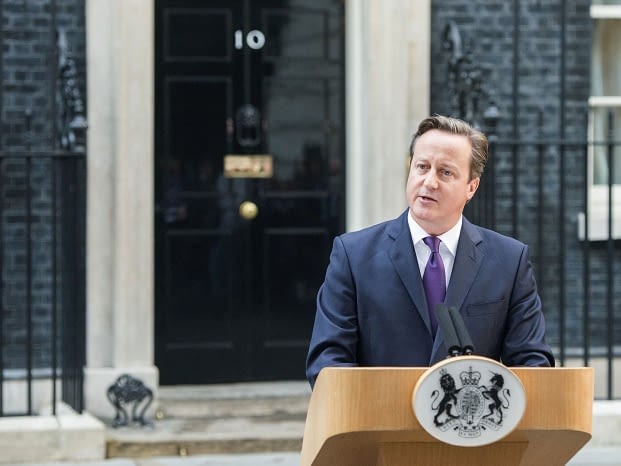 What did David Cameron say about Scottish referendum results?

The PM’s speech in full

David Cameron has hailed the decision of the people of Scotland for voting “no” to independence.

The people of Scotland have spoken. It is a clear result. They have kept our country of four nations together. Like millions of other people, I am delighted.

As I said during the campaign, it would have broken my heart to see our United Kingdom come to an end.

And I know that sentiment was shared by people, not just across our country, but also around the world… because of what we’ve achieved together in the past and what we can do together in the future.

So now it is time for our United Kingdom to come together, and to move forward.

A vital part of that will be a balanced settlement – fair to people in Scotland and importantly to everyone in England, Wales and Northern Ireland as well.

Let us first remember why we had this debate – and why it was right to do so.

The Scottish National Party was elected in Scotland in 2011 and promised a referendum on independence.

We could have blocked that, we could have put it off but just as with other big issues, it was right to take – not duck – the big decision.

But I am also a democrat. And it was right that we respected the SNP’s majority in Holyrood and gave the Scottish people their right to have their say.

Let us also remember why it was right to ask the definitive question, Yes or No.

Because now the debate has been settled for a generation or as Alex Salmond has said, perhaps for a lifetime.

So there can be no disputes, no re-runs – we have heard the settled will of the Scottish people.

Scotland voted for a stronger Scottish Parliament backed by the strength and security of the United Kingdom and I want to congratulate the No campaign for that – for showing people that our nations really are better together.

I also want to pay tribute to Yes Scotland for a well-fought campaign and to say to all those who did vote for independence: “We hear you.”

We now have a chance – a great opportunity – to change the way the British people are governed, and change it for the better.

Political leaders on all sides of the debate now bear a heavy responsibility to come together and work constructively to advance the interests of people in Scotland, as well as those in England, Wales and Northern Ireland, for each and every citizen of our United Kingdom.

To those in Scotland sceptical of the constitutional promises made, let me say this we have delivered on devolution under this Government, and we will do so again in the next Parliament.

The three pro-union parties have made commitments, clear commitments, on further powers for the Scottish Parliament.

We will ensure that they are honoured in full.

And I can announce today that Lord Smith of Kelvin – who so successfully led Glasgow’s Commonwealth Games – has agreed to oversee the process to take forward the devolution commitments with powers over tax, spending and welfare all agreed by November and draft legislation published by January.

Just as the people of Scotland will have more power over their affairs, so it follows that the people of England, Wales and Northern Ireland must have a bigger say over theirs.

The rights of these voters need to be respected, preserved and enhanced as well.

In Wales, there are proposals to give the Welsh Government and Assembly more powers.

And I want Wales to be at the heart of the debate on how to make our United Kingdom work for all our nations.

In Northern Ireland, we must work to ensure that the devolved institutions function effectively.

I have long believed that a crucial part missing from this national discussion is England.

We have heard the voice of Scotland – and now the millions of voices of England must also be heard.

So, just as Scotland will vote separately in the Scottish Parliament on their issues of tax, spending and welfare so too England, as well as Wales and Northern Ireland, should be able to vote on these issues and all this must take place in tandem with, and at the same pace as, the settlement for Scotland.

I have asked William Hague to draw up these plans.

I hope the Labour Party and other parties will contribute.

It is also important we have wider civic engagement about to improve governance in our United Kingdom, including how to empower our great cities. And we will say more about this in the coming days.

This referendum has been hard fought. It has stirred strong passions. It has electrified politics in Scotland, and caught the imagination of people across the whole of our United Kingdom.

It will be remembered as a powerful demonstration of the strength and vitality of our ancient democracy.

We can all be proud of that.

It has reminded us how fortunate we are that we are able to settle these vital issues at the ballot box, peacefully and calmly.

Now we must look forward, and turn this into the moment when everyone – whichever way they voted – comes together to build that better, brighter future for our entire United Kingdom.