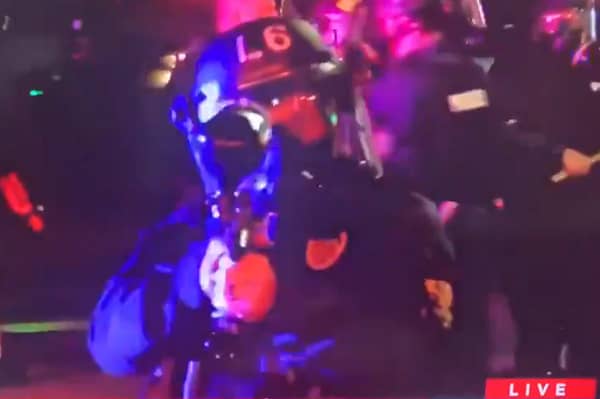 Minnesota Police have shown total disregard to the freedom of press for a second day running, this time they opened fire with pepper bullets at a female reporter live on-air.

Kaitlin Rust, a reporter at Wave 3 News who was legally doing her job, with her producer and cameraman approached the riot police to get live on-air footage.

A Minnesota police officer walked towards her and aimed his gun directly at her, she then began screaming and shots were fired at them with pepper bullets for no lawful reason.

In the live on-air footage, Rust can clearly be heard saying “I’m getting shot.”

The studio anchor asked Rust, “are you okay.”

The studio presenter asked, “Who are they aiming at?”

The reporter her sounded terrified said, “At us! They’re aiming directly at us!”

Rust said it could have been pepper or rubber bullets, “I guess we were behind their line, I guess a little too close for comfort.”

A spokeswoman for Louisville Metro Police apologised for the incident that happened on Friday, saying it is not our intention “to target or subject the media as they try to cover this.”

Adding, “It’s not something that should have occurred if she was singled out as a reporter, and that is what the video looks like occurred.”

This just happened on live tv. Wow, what a douche bag. pic.twitter.com/dQKheEcCvb

Also a CNN reporter his producer and cameraman were illegally arrested whilst live on-air legally reporting the riots in Minneapolis.

Omar Jimenez explained in a very mild professional manner that he is with CNN produced is press card and could be seen being handcuffed by State Police, and was given no reason for his arrest.

The CNN crew were reporting on the riots that has bought Minneapolis to it knees on its third day of violent riots.

Watch: A Russian tank explodes and the turret is blasted...