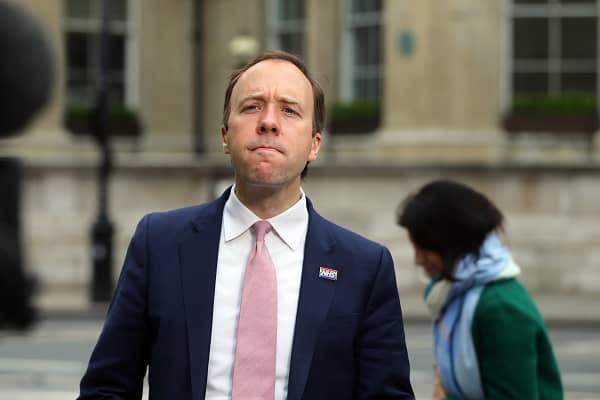 The Health Secretary Matt Hancock was caught having an affair with aide Gina Coladangelo after CCTV shows the pair embracing in a passionate kiss.

Coladangelo who is 43, and married and married father of three, Hancock 42, employed her in March last year as an unpaid advisor.

Hancock said in a statement, that “I remain focused on working to get the country out of this pandemic, and would be grateful for privacy for my family on this personal matter.”

The Prime Minister’s spokesman told reporters, after being asked will Hancock be sacked, said, “You’ve seen the Health Secretary’s statement, so I would point you to that.

“I don’t really have anything further to add.

“The Health Secretary set out that he accepted he had breached the social distancing guidelines and he has apologised for that.

“The Prime Minister has accepted the Health Secretary’s apology and considers the matter closed.”

The spokesman was then asked whether Johnson had “full confidence” in Hancock, to which he replied, “Yes.”

The passionate kiss was alleged to have taken place around 3pm on 6 May outside his ninth floor Whitehall office.

Some 11 days later the Covid restrictions were lifted, only then allowing people from different households to mix.

When the government’s top scientific advisor, Professor Neil Ferguson was caught breaking the rules by meeting his girlfriend in May last year, Hancock said at the time that he was “speechless.”

In May last year, just months after Hancock was having an affair with married Gina Coladangelo, he was asked by Sky News if he thought Professor Ferguson should have been prosecuted.

The Health Secretary said then to Sky News, “It’s a matter for the police, as a government minister I’m not allowed to get involved in the operational decisions of police matters.

“But I think the social distancing rules are very important and people should follow them.”

Human rights lawyer Adam Wagner, who has analysed Covid restrictions said on social media “there is an important question of whether the health secretary broke his own lockdown laws”.

“Gatherings of 2 or more indoors were illegal except for permitted purposes… if they were at work, they might argue this fell within the work exception but I think, especially for health secretary, that’s not a good argument”.

“For the rest of the population, indoor relationships with someone you don’t live with were (bizarrely) illegal until 17 May 2021.”