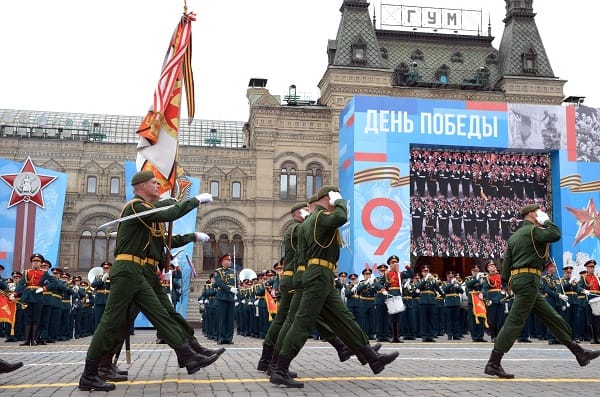 The world could see “Ukrainian prisoners of war” being paraded through Moscow during their victory parade on 9 May, just as they with the “Germans at the end of the Second World War.”

The former head of the British Army Lord Dannatt said that Vladimir Putin could parade the captured soldiers which includes two British men through the streets of Moscow for their annual World War Two Victory Day.

This could be used as an attempt to claim “victory” for Putin over his invasion into Ukraine which is a “grim” prospect for the prisoners of war.

The former army chief spoke of the Ukrainian troops and civilians who are holed up in the besieged Azovstal steel works and warned we could now be “seeing the final days.”

Lord Dannatt told Sky News, “I think we are now seeing the final days of this tragic and terrible episode going on at the Avozstal steelworks.

“If you think back a week or so ago, maybe 10 days ago, Putin announced that he would seal it off so not even a fly will be able to get in and out.

“Well, that was an indication that they were finally the Russians are finding it very difficult to finally subdue the garrison there.

“They have now come to the conclusion that they’ve got to have some form of victory to celebrate on Monday, and it would appear that they have now resumed the direct attack on the steelworks in order to try and snuff out the remaining parts of the resistance there.

“So that they can claim on Monday that they have captured Mariupol and therefore they have completed their land corridor from Crimea through the Donbas into Russia proper.

“I mean, this is a tragedy that’s unfolding in front of our eyes.

“Some of the civilians may get out over two or three days ceasefire which is being talked about.

“For the soldiers in there, I’m afraid the prospect is very grim and I think we may also see the very ugly sight of Ukrainian prisoners being paraded through Moscow next Monday at their victory parade.

“It happened with the Germans at the end of the Second World War, and an awful feeling it’s going to happen again on Monday.”