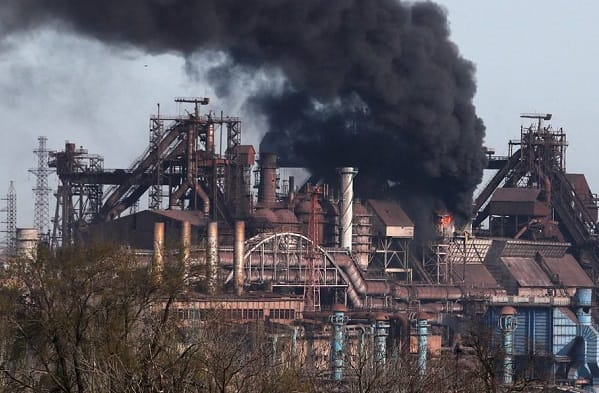 The Azov Regiment who are claimed to have far right ideology at the Azovstal Steel Works continue to hold the fortress.

Horrific ‘apocalyptic’ images of 2,000 civilians sheltering in the besieged Ukrainian steel plant who are ‘under fire 24 hours a day’

Ukrainian commander holed up in Mariupol warns we are ‘facing our last day, if not hours’ and ‘this could be our last message’

“Since April 25, we have been holding a circular defense at the Azovstal plant.

“It’s already the second day since the enemy broke into the territory of the plant. There are heavy and bloody fights.

“I am proud of my soldiers who are making superhuman efforts to hold back the enemy offensive. I thank the whole world for the tremendous support of the Mariupol garrison. Our soldiers deserve it.

“The situation is extremely difficult, but no matter what, we continue to follow orders and hold our ground,” reads a statement posted on social media.

On Wednesday Mariupol’s Mayor Vadym Boichenko said, that fierce fighting has broken out for the territory of Azovstal metallurgical plant.

Boichenko announced on Wednesday, “Today there are heavy battles on the territory of our fortress – Azovstal. Our brave guys are defending this fortress, but it is very difficult, because they are working on this fortress from heavy artillery, working with tanks, aircraft, the ships have approached and are also extinguishing this fortress.”

He added, “Unfortunately, communication with the guys [Ukrainian soldiers at Azovstal plant] was lost today.”

Forbes McKenzie, the chief executive of McKenzie intelligence told Sky News that Ukraine’s Azov battalion who are holed up at the steel works have a far right ideology, this will play in to Vladimir Putin’s claims that he is attempting to “denazify” the country.

McKenzie who is a former British Army intelligence officer added, “Should there be a success, it will give Putin a good news story in his speech, which is expected to take place on the 9 May Victory Day.”