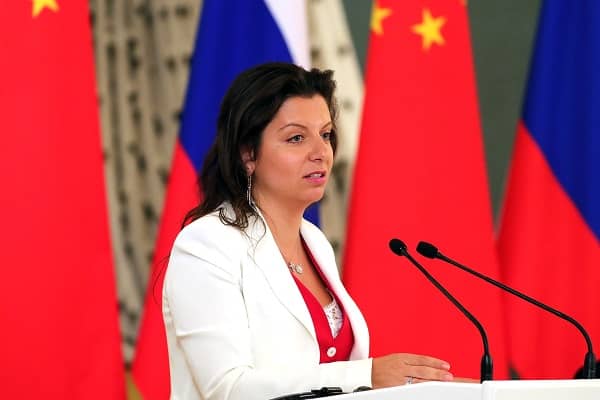 In her popular programme Simonyan gave her usual rant saying that Russians should “get used to this new life” over the West’s “alienation and confrontation.”

She added that she “can’t stand the whining” over the Ukraine war and said Russians should be “rejoicing.”

Putin’s mouthpiece ranted, “They all believe that we will lose and the West will win. They don’t understand that it’s impossible.

“It’s simply impossible. It will never happen. Either we win, or this will end badly for humanity, there is no other way.

“When people ask how long this will go on, in terms of our alienation, confrontation with the West, I only see one version of events.

“People, this is forever. Get used to this new life. I can’t stand the whining of ‘feeling bad for the children.’

“Why are you feeling sorry for the children? Some feel bad that their children cannot study in the West anymore.

“They feel bad that the brave new world will no longer be open to them, that everything will be closed to them.

“I tell them, ‘People, you should be rejoicing.’ The brave new world is racing straight to hell.

“In 10-years, you’ll say ‘Thank you very much. Thank you that my child never studied in the West’ because your child will remain a normal person.

“No matter what happens and how we behave, our confrontation with them is for the rest of our lives.”

Russian Security Council Secretary Nikolai Patrushev warned on Tuesday and told Russian Argumenty i Fakty newspaper, that victory must be the end goal for Russian and “it cannot be otherwise.”

He added, “All the goals set by the President will be fulfilled. It cannot be otherwise, because truth, including historical truth, is on our side. We are not chasing deadlines.”