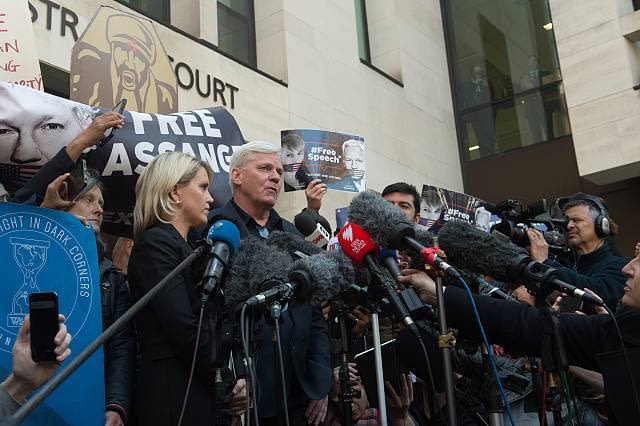 The Swedish deputy director of prosecutions Eva-Marie Persson announced that allegations of rape against WikiLeaks founder Julian Assange are to reopen.

Persson said on Monday, “I have today decided to reopen the investigation.

“There is still probable cause to suspect that Mr Assange committed rape.”

She said a European Arrest Warrant is to be issued for Assange.

She said, “The prosecutor will shortly request that Julian Assange be detained in his absence suspected on probable cause for an allegation of rape.”

Speaking on the subject of extradition to the US, “I am well aware of the fact that an extradition process is ongoing in the UK and that he could be extradited to the US.

Adding, “In the event of a conflict between a European Arrest Warrant and a request for extradition from the US, UK authorities will decide on the order of priority.”

Prosecutors said they had dropped the investigation in 2017 as they could not proceed whilst Assange was inside the embassy.

“Recall that it was initially dropped in 2010 when a prosecutor concluded that, ‘no crime at all’ had occurred. It was reopened as WikiLeaks prepared to publish the Iraq War Logs.

“This case has been mishandled throughout. After the Swedish prosecutor refused to question Assange in the Ecuadorian embassy for years, it was only when forced by Swedish courts that she travelled to London to finally question Assange.

“Then Sweden wanted to drop its arrest warrant for Assange as early as 2013. It was the British government that insisted that the case against him continue.

“Since the investigation was closed in 2017, we have received reports of the destruction of records and correspondence on behalf of UK and Swedish authorities, surely an impediment to a thorough investigation.

“Assange was always willing to answer any questions from the Swedish authorities and repeatedly offered to do so, over six years. The widespread media assertion that Assange ‘evaded’ Swedish questioning is false.

“This investigation has been dropped before and its reopening will give Julian a chance to clear his name.”

“He has always wanted to help solve this Swedish issue, his big predicament in life is that he risks being extradited to the United States because of his journalistic work.”