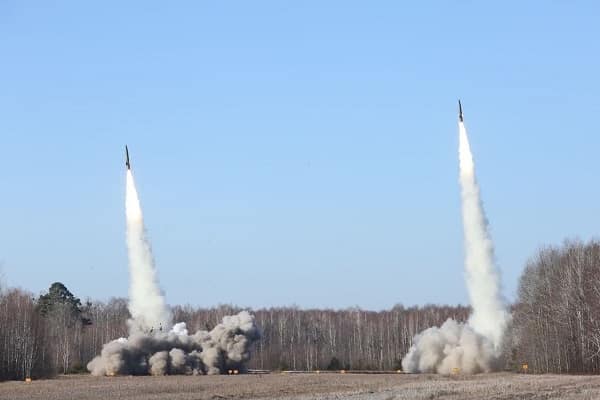 The Russian President Vladimir Putin announced on Tuesday that he is set to deploy the “Prometheus” hypersonic nuclear missile system which is designed to shoot down enemy missiles and aircraft.

The Prometheus S-500 anti aircraft missile system can shoot down missiles up to an altitude of 125-miles and even low orbit satellites in space and is to be deployed to the battlefield in Ukraine.

Putin has warned former countries of the Union of Soviet Socialist Republics (USSR) which spanned most of Eurasia, that if any of them defies Russia then they will see a repeat of the Ukrainian invasion.

Any countries that are former members of “historic Russia” will no longer be “allies” with Moscow if they turn on the Kremlin.

Speaking to military graduates in Moscow, the Russian President said, “We will continue to develop and strengthen our armed forces, taking into account potential military threats and risks, and based on the lessons of modern armed conflicts, and improve their combat strength.”

Putin added, “Among the priority areas is equipping troops with new weapons systems that will determine the combat efficiency of the army and navy in the coming years and decades.”

Previously Major General Babakov, commander of Russian missile defence troops, warned, “The S-500 air defence system is capable of destroying hypersonic weapons of all modifications, including in near-space, in addition to aerodynamic and ballistic targets, which makes it possible to say with confidence that this system is unique.”

This also comes after the UK’s top General, Sir Patrick Sanders with nuclear war after he ordered every British soldier to “prepare for war in Europe.”

Lieutenant General Buzhinsky warned, “He [General Sanders] doesn’t understand that as a result of the Third World War Britain will physically cease to exist.

“The island will vanish, so I’ve no idea where he or his descendants will live.”

Buzhinsky confirmed that Russia are now at war with NATO, he warned any attempts to impede on Russia’s sovereign territory could make the situation in Ukraine look like “a joke.”

General Sanders said on his fourth day in charge of the armed forces, told every British soldier that they must prepare “to fight in Europe once again” as the conflict in Ukraine continues.