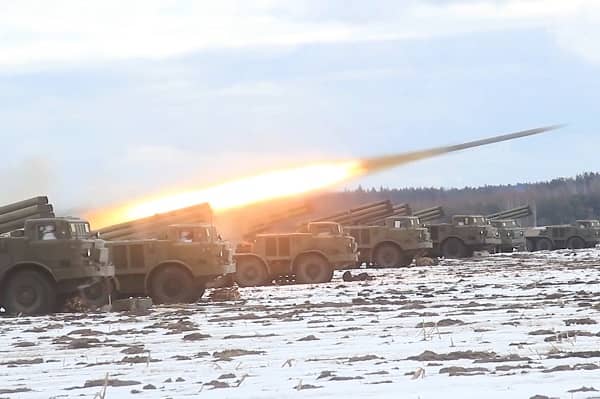 Russia has been accused of war crimes after a military source suggested that “cluster” munitions were used in a carpet bombing on Monday.

Cluster bombs scatter smaller munitions over a wide area which increases the potential for severe damage to a population causing indiscriminate damage.

He added, “Dozens of dead and hundreds of wounded.”

Speaking about the bombing of Kharkiv, the military source told the MailOnline, “The BM-21 Grad is a multiple launch rocket system used for ‘area denial’, dropping cluster bombs on a concentrated area.

“It’s mainly used on enemy troops before an offensive.

“Used against civilians, it’s not only a war crime but has only one purpose – to spread terror and alarm among the civilian population.”

Ukrainian Foreign Minister Dmytro Kuleba confirmed that he would be providing evidence to the International Court of Justice, said, “Today’s Russian attacks on a kindergarten and an orphanage are war crimes and violations of the Rome Statute.

“Together with the General Prosecutor’s Office we are collecting this and other facts, which we will immediately send to the Hague.

Meanwhile, the Ukrainian Armed Forces accused the Russian army of using “methods of war prohibited by international humanitarian law”, in a post shared to the force’s official Facebook page.

Russian troops have been accused of “seizing social infrastructure,” “wearing the uniform of the Ukrainian military, police and State Emergency Service,” and “occupying children’s camps and schools”, amongst many other things.

Expert explains we are officially in a recession, but there’s no need for businesses to panic and give into the scare mongering

In recent months, the cost of living in the UK has risen and continues …