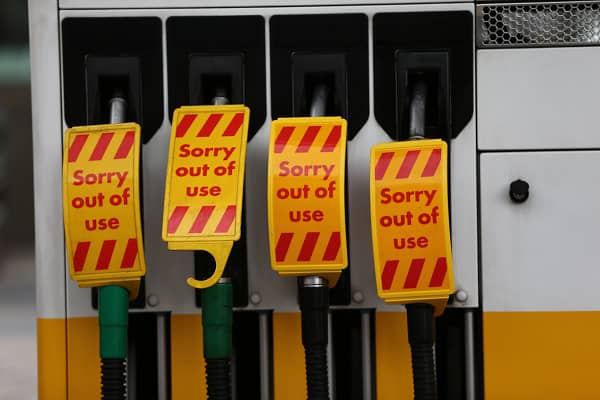 The UK is facing a serious problem with fuel theft at the moment. In the past few weeks alone, it’s been revealed that over £250,000 of diesel was stolen from a high-security naval base, while another story has detailed how three members of a gang responsible for illegally siphoning off £1 million in fuel have been apprehended. Meanwhile, cases of petty fuel theft are also on the rise, as police warn about a flurry of incidents wherein drivers don masks and fill their tanks, before driving off without paying.

Unfortunately, these types of transgressions are becoming more and more commonplace around the world, as skyrocketing fuel prices and governmental subsidies feed a flourishing black market. That problem is exacerbated (and indeed, sometimes entirely instigated) by income inequality and the desperation brought on by impoverishment. As such, lawmakers must find solutions to curb this damaging practice, privileging both technological innovations—such as the highly-advanced molecular markers which can facilitate verification that fuel has not been smuggled or adulterated—as well as addressing the issue at its root cause by closing the economic divide and lending targeted support to those most in need.

With energy bills and petrol pump prices spiralling out of control, many Britons have turned to crime to access the commodities they need. In one of the more audacious incidents, a quarter of a million pounds’ worth of fuel was stolen from a high-security Royal Navy base over a number of weeks last September. Elsewhere, a large-scale fuel theft operation has been uncovered by North Wales Police (NWP), who have arrested three individuals suspected of involvement with around 40 separate robberies totalling more than £1 million in cumulative value.

Perhaps most shocking of all, the number of people “bilking” – or filling up their cars at garage forecourts and leaving without paying – has risen 200% from last year. Opportunistic thieves target the busiest times and the most inconspicuous pumps to increase their chances of escaping undetected, with one brazen individual even filling a wheelie bin with petrol and simply walking away. Theft of cooking oil is also on the rise, with an estimated fifth of UK supplies being stolen at the present time.

Of course, Britain is far from the only country to experience such difficulties in recent months, with widespread protests in France, Germany and Spain about the runaway price of fuel. If nations as relatively affluent and developed as these are suffering from the crisis, it’s inevitable that the problems are even more pronounced in more impoverished parts of the globe. What’s more, the issue has been exacerbated further by governmental subsidies introduced to alleviate the pressure.

Although well-intentioned, these measures often only succeed in accentuating the cross-border disparity in fuel prices, thus incentivising smuggling. For example, the Nigerian Senate recently approved a four trillion naira (£10 billion) subsidy for fuel in 2022, prompting the Minister of State for Petroleum Resources Timipre Sylva to brand the decision “a criminal enterprise” and eliciting a plea from the World Bank to reconsider. As a result of the subsidies, fuel is far cheaper in Nigeria than neighbouring countries like Cameroon, Chad, Ghana and Togo, thus encouraging smugglers to make a quick buck by selling the fuel elsewhere. Similar situations exist all over the world, from Syria to the Philippines.

However, that latter country has not suffered the situation lying down. With the Asian Development Bank (ADB) estimating a few years ago that the Filipino government’s annual revenue losses from fuel smuggling and misdeclaration of petroleum products added up to some 37.5 billion Philippine pesos (£55 million), those in power have turned to technology for the answer. Since 2019, the country has introduced a sophisticated fuel marking programme, whereby all petroleum products are injected with a molecular marker which allows the authorities to verify the fuel’s compliance with legal requirements, such as taxes paid, at every stage of the supply chain, even at low concentrations.

The results have been impressive, to say the least. By October 2021, the Philippines’ government had amassed some 299 billion Philippine pesos (£4.4 billion) in duties and taxes from the scheme, while it has also allowed them to seize many illegal shipments and catch many criminals in the act. Other countries which have implemented their own fuel marking initiatives, such as Uganda, have reported similarly encouraging results. As such, technologically-advanced fuel marking could provide the perfect deterrent to bring the rampant smuggling problem under control.

Treatment for cause as well as symptoms

Of course, such solutions will never serve as a comprehensive cure-all on their own. Instead, governments must also ask themselves why people are turning to the practice of fuel smuggling in the first place. While there will always be plenty of bad apples who look to leverage the current global crisis for their own economic gain, the simple truth is that many unfortunate individuals smuggle fuel because they have no other way to feed their families.

That’s certainly the case in northern Syria, where even former government employees have been forced to seek employment in the illicit fuel trade just to survive. With 97% of the north-western population of Syria in extreme poverty (earning under £1.60 per day), smuggling represents a glimmer of hope, even as the regime is brutally cracking down on the practice. Thankfully, income inequality doesn’t exist on nearly as dramatic a scale in the UK, but the issue remains a significant one that continues to give rise to fuel theft. In order to stamp out the fuel black market once and for all, governments must find a way to treat the symptoms of fuel theft – such as marking products to deter illegal activity – even as they tackle the poverty and inequality that remains its root cause.