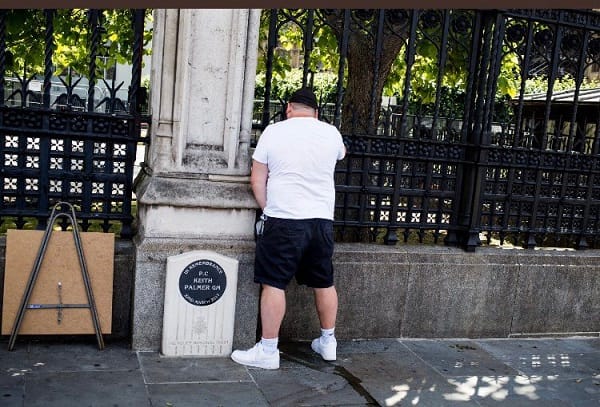 Police have arrested a man suspected of urinating next the memorial of the fallen hero PC Keith Palmer in Westminster, London.

In what has been described as a horrendous act by thousands of Brits, the Chairman of the Metropolitan Police Federation Ken Marsh said, he should be sent to prison. PC Palmer was stabbed to death whilst on duty defending Parliament during the 2017 terrorist attack in Westminster.

Marsh furiously condemned the “disorder and unruliness” which shamefully took place during the far-right thuggish protests in Whitehall on Saturday.

The man handed himself into police in Essex and is currently in custody, the Metropolitan Police said in a statement.

MP Tobias Ellwood who is a former British Army officer and went to the aid of our hero PC Palmer, he tried to save his life with police medics and London Ambulance Service, but he sadly died.

Elwood for Bournemouth East, and Chairman of the Defence Select Committee, tweeted a picture of the man on Saturday, and wrote, “Absolute shame on this man.

“Of all the images to emerge over these few testing days I find this one of most abhorrent.

Metropolitan Police Commander Bas Javid said on Saturday, “We are aware of a disgusting and abhorrent image circulating on social media of a man appearing to urinate on a memorial to PC Palmer.

“I feel for PC Palmer’s family, friends and colleagues. We have immediately launched an investigation, and will gather all the evidence available to us and take appropriate action.”