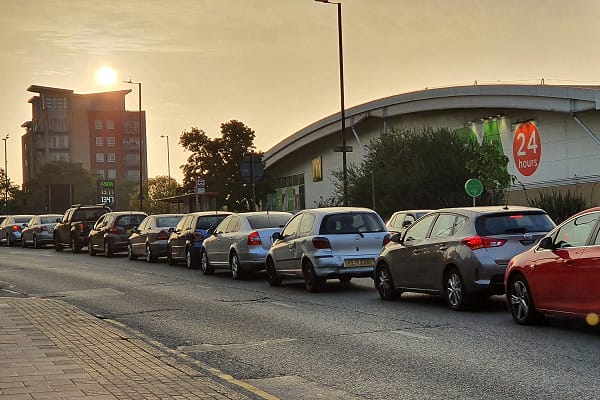 Small business owners have slammed panic buyers as they are losing out financially as they have no fuel to deliver their goods to customers.

Panic buying of fuel is now hit its sixth day and motorists are still queuing for hours despite being told not to by the government.

Within in days 90% of petrol stations across the UK are running dry of petrol and diesel and the huge demand has pushed fuel prices up, which will have an impact on small businesses.

“As a business that has grown through being able to personally deliver to our local customers, I’m now faced with the challenge of not having enough fuel to get around, run my business and earn a living.”

Wendy Ward of Sheffield-based charity fund-raising specialists Let’s Save also said, “Why on earth would you fill your car up with petrol and jerry cans unless you are doing community work, working in emergency services or are a key worker?

“How selfish to take more than your fair share.”

The government has come under fire, but the Transport Secretary Grant Shapps defended the governments criticisms that they were slow to mobilise the army amid fuel crisis

Shapps said, “There is a series of escalations that you go through in a crisis like this.

“We have already put 18 different steps in place which stretch right the way back to the spring.

“The system was just about coping until last weekend and it would have been capable of continuing to do so.

“Unfortunately, as we have seen with toilet rolls and other things, once people start to pursue a particular item, it can quickly escalate.

“But there is only so much petrol you can transfer into tanks. That is starting to work its way through.”

Shapps also condemned drivers who have filled up plastic water bottles with petrol.

He added, “It is dangerous and extremely unhelpful.”

The RAC warned on Monday that every forecourt across the UK now needs to re-stock at the same time as a result of drivers panic buying which will put “unbelievable pressure” on the supply chain.

Simon Williams, RAC fuel spokesman said, “We urge the government to do everything in its power to plug the gaps in the supply chain and keep deliveries moving normally.

“But as so many drivers filled up over the weekend, there should be less overall demand as long as fuel makes its way back on to forecourts in the next few days.”

Panic buyers have also contributed to pump prices, which is going to be a “pretty bleak picture for drivers.”