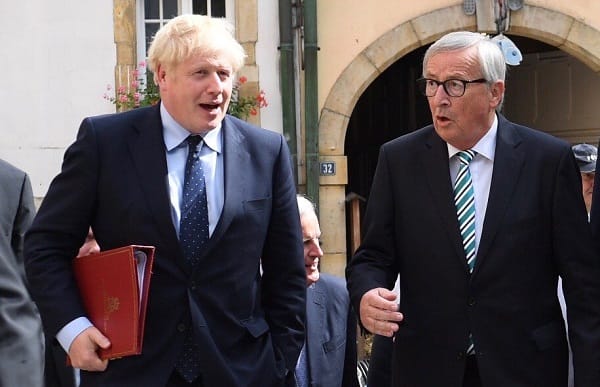 Nigel Farage the Brexit Party leader has said the prime ministers Brexit deal between the UK and the EU is a “dreadful deal.”

Farage told Sky News that should the withdrawal agreement fail then, “there is a possibility of putting together a Leave alliance for the next general election.”

He added, “I think there is an opportunity here for a Brexit alliance to fight the election that would win a big majority in parliament.”

The leader of the Democratic Unionist Party, Arlene Foster has said they will not back Johnson’s new Brexit deal, despite the PM saying we can take back control.

Labour leader Jeremy Corbyn has hit out at the new deal, he said, “this Brexit deal should be rejected” saying this deal is worse than “Theresa May’s deal” that was rejected.

Corbyn said, “From what we know, it seems the prime minister has negotiated an even worse deal than Theresa May’s, which was overwhelmingly rejected.

“These proposals risk triggering a race to the bottom on rights and protections: putting food safety at risk, cutting environmental standards and workers’ rights, and opening up our NHS to a takeover by US private corporations.

“This sell out deal won’t bring the country together and should be rejected.

“The best way to get Brexit sorted is to give the people the final say in a public vote.”

According to the Sun newspaper, Labour MPs have been told by the chief whip they are to back a second referendum on Saturday’s House of Commons session.

The Liberal Democrat leader Jo Swinson said, “The fight to stop Brexit is far from over.

“The next few days will set the direction of our country for generations, and I am more determined than ever to stop Brexit.

“When this deal comes to parliament, we will use every possible opportunity to give the public a People’s Vote on the Brexit deal that includes the option to remain in the EU.”