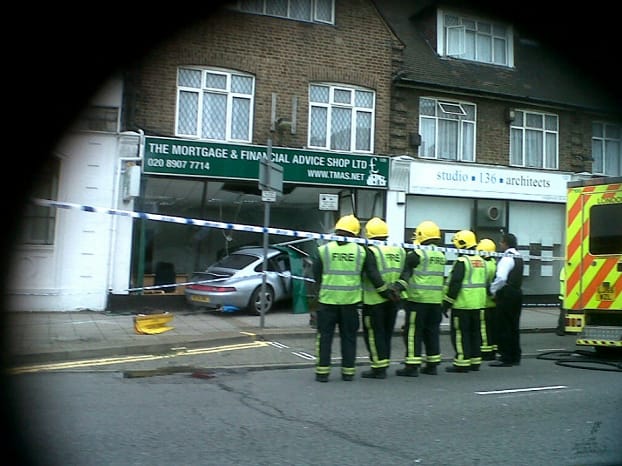 Coleman was picking up his children from school when a grey Porsche rammed into his financial advice shop on Kenton Road, Harrow, destroying his desk completely.

“There is a big pile of debris and my desk just looks like total carnage. I would have died if I had been at my desk, there’s no doubt in my mind about that,” Coleman told the London Evening Standard.

“I am really lucky to be alive. I only took the day off to do the housework and pick the kids up from school. My mother usually does that, but she’s on holiday. It’s amazing to think that’s what probably saved my life,”

His brother, Steve Coleman, who was in the office at the time of the accident, dodged death by just a few inches after he went to the middle of the office to make a phone call.

“I was walking towards the middle of the office when it all happened. There was a tremendous crash like a bomb going off. Bits of desk and glass and computer were blown everywhere,” he told the Standard.

“The car was revving very loudly and I just kept thinking it was going to exploded I instinctively just jumped back and when I realised what had happened I had to get out of there,”

Eyewitness Rina Metha said she saw the sports car swerve out of control to miss a schoolgirl, who had unexpectedly run onto the road.

The driver was unhurt and the police has made no arrests.