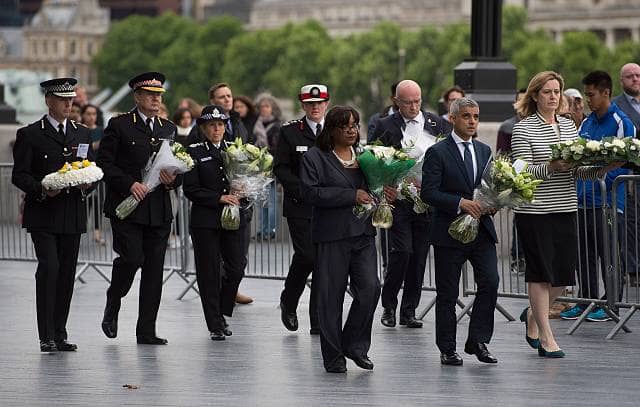 Mayor warns Tories to slash 12,800 police in London losing up to £700m in funding

The mayor of London, Sadiq Khan has warned that London will lose almost 40 per cent of their front-line police officers under Tory budget cuts.

Scotland Yard has been forced to make £600m in saving since 2010 when Theresa May was the home secretary and now they will be forced to slash a further £400m of their budget.

The Metropolitan Police on top of the £400m could face further cuts of around £700m as the Conservative party are to change the policing formula, according to Khan.

Khan said: “Police officers in our community’s act as the eyes and ears of the security services, providing the intelligence and information that allows us to disrupt attempted terrorist attacks.”

“Cuts on this scale would make it harder to foil future terrorist attacks on our city, and as the mayor of London I’m simply not willing to stand by and let that happen.”

Metropolitan Police commissioner, Cressida Dick said Monday: “In the face of this changing and changed threat, absolutely I will be seeking for London and for policing generally more resourcing obviously.”

Piers Morgan wrote Monday in the Mail Online and said: “lest we forget, was the same woman [Theresa May] who when she was Home Secretary for six years slashed UK police numbers by 20,000.”

Monday Conservative culture secretary, Karen Bradley had a very awkward live TV interview with Piers Morgan, she just kept dodging such a simple question on police cuts to the frustration of many.

Bradley said to Morgan on ITV Good Morning Britain the he is asking her “pub questions” and she dramatically floundered.

Morgan accused her of not wanting to admit to “the reality of the police cuts” during their on-air clash.

Bradley then said: “What I’m interested in is making sure that we have the right resources, the right powers, and the right training and capabilities.”

“I am assured by the police that they have that to deal with the counter-terrorism threat, but we need to look, learn lessons and make sure that we act where appropriate and we need a leader who is prepared to take those decisions, and that is Theresa May.”

Morgan was persistent, he pressed her yet again for the simple answer to a very simple question, she said: “Piers, we are here to talk about how the attack on Saturday, how we react to that attack, and how we make sure on Thursday that we have the right person elected to Downing Street so that we can deal with it.”

Sunday, Labour leader Jeremy Corbyn called for May to resign over her plans to cut further police numbers.