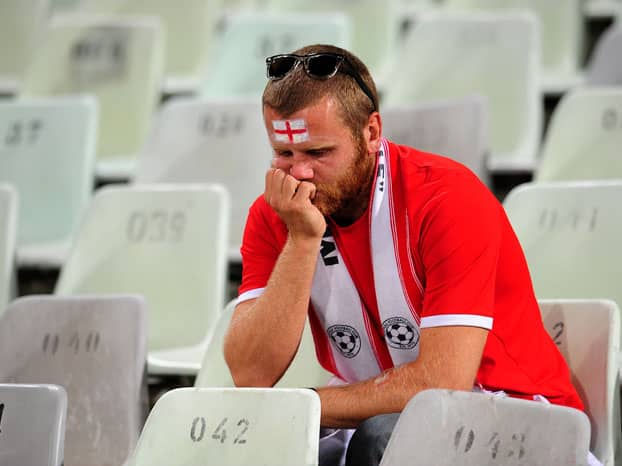 In the summer of 2010, I flew down to Cape Town on business and took in the England World Cup game against Algeria. That 90 minutes was depressing and mind-numbingly disillusioning.

But what I was really seeing that night were eleven of the poorest people in my country. Proudly displayed on their shirts were the three lions from England’s coat of arms. The players in return showed only a poverty which disgraced it.

There was also a poverty of responsibility to the thousands of people who had saved, re-mortgaged, and given up their family holidays to come 6000 miles to see them achieve something. For themselves and for their country. At the end of the match very few of the players went across to their supporters and thanked them for coming – they couldn’t even muster up that small courtesy.

It was a dreadful sight – these players were well waged within themselves but showed they had little idea about their wider community, the people who pay their wages by faithfully turning up, week in, week out to watch them do their work, perform and win for their supporters’ team. They had failed to see how their sports community is not just about themselves, but about their followers, the nation as it happened, on that day.

Because we are all interdependent on the aspirations and the ambitions of the country, whether it’s through sport or our general well-being and prosperity. Cohesion, through whomever or whatever represents our amazing country, is our key to the future, when many questions are asked about our ability to compete as a twenty-first century player.

Cohesion and commitment, skills, investment, hard work and taking responsibility are the keys to fixing Britain.

The footballers have wealth which very few ordinary people can aspire to – let alone achieve. But wealth is not just about the pounds and pence from a huge Wayne Rooney contract. It’s much more than that; ordinary spectators of this game of huge rewards deserve to have their names on the team sheet as well. We all play for Team GB and should all be pushing forward for our country’s success.

I’m talking about creating wealth on a socially inclusive basis, which can be a game plan for everyone.

My vision of socially inclusive wealth creation isn’t simply about the notes in your wallet and change in your pocket. It’s not just about the bottom line. There’s more to a wealthy nation than just money in the bank.

“Democracy is being replaced with focus groups and lobbyists, with no reference to the local voters’ concerns”

Without doubt, a nation has to be wealthy in the conventional sense. It must succeed in a fiercely competitive, globalised economy. And we can only reach out, down, round and under to those who are less fortunate than ourselves if we, as a nation, have sufficient material wealth. We need the money in order to deliver as a nation.

The Good Samaritan bent down, helped his enemy and looked after him. But he couldn’t have done any of that if he hadn’t got a few bob in his pocket.

So, we have to win in the competition that is globalisation and we have to earn our way in the world.

The only way to do that is to have a successful business environment in a democratic capitalist country. We need a competitive and simplified tax regime which works with the grain of business. We need civil servants and politicians who are onside for business, and don’t act as if the commercial sector is ‘at it’ every day of the week. We also need to mould our role in a European Union to be outwardly focused to compete with the world, not looking inwards to take everything to the lowest common denominator, pandering to the forces of yesterday.

And above all, we need an education system that pushes people much further, gets them into work, fit for purpose, able to add value to their country and themselves. As I said in my address to the National Association of Head Teachers’ Annual Conference in 2005, ‘unless we educate children about risk, get them to understand it, to embrace it and exploit it, then we will fail as a nation.’

All of that goes towards all of us creating wealth. But there are other types of wealth too, which the combination of social inclusion and wealth creation can build on.

My worry is that, too often, political parties feel as though they are no longer elected to make public policy. Instead a few individuals around party leaders manufacture policies purely to get elected. Democracy is being replaced with focus groups and lobbyists, with no reference to the local voters’ concerns. There’s a powerful executive, and we can only observe its doings from the outside – MPs and civil servants alike are prisoners of a system that they either obey, or else cease to have a career.

One of the major problems that government is going to face is the tribalism which runs through our governing class. I was very disappointed when, in response to the invitation David Cameron and Nick Clegg extended to the former Labour politicians Frank Field, Alan Milburn and John Hutton to bring their experience and their care for the country to help on social mobility, pension and welfare reform, the former Deputy Prime Minister, John Prescott, opined that they were letting down the Labour movement, accusing them of being class traitors. Prescott’s tribal utterings are twentieth century speak. History. It’s not the kind of talk that is consistent with what we have to do. We need to dip into the talent of the nation, and bring it in to help with these real, serious issues. Lumbering into the tribalism of yesterday will not help our children and their children. Surely country comes before party.

We need democratic legitimacy from those who govern us. It’s not good enough in a high-tech, communications rich, mediasavvy world, to have the old systems of placing an ‘X’ in a voting booth on a piece of paper every five years. People now need to feel they’ve participated in the laws being made for them, and that their vote has counted, not just been counted, and made a difference in the electoral process of the country and in the conduct and the voting behaviour of those they elect. Our education not only must deliver people fit for work, but it also must understand where our nation came from, and what it stands for. That must apply to everyone who lives on our islands, whatever their colour or religion. That calls for a wealth of confidence in our self-belief.

Come back tomorrow to discover Lord Digby Jones’ thoughts on social cohesion in the UK and business’ role in creating it, in part 2 in our extracts from his new book, Fixing Britain: The Business of Reshaping our Nation.

Lord Jones was director general of the CBI between 2000 and 2006, and minister for trade 2007 to
2008. He is currently an ambassdor for UKTI, and has roles with JCB, Flybe, Jaguar Cars, Monetise and Babcock International Group. His new book, Fixing Britain – The Business of Reshaping Our Nation is out now, priced £9.99