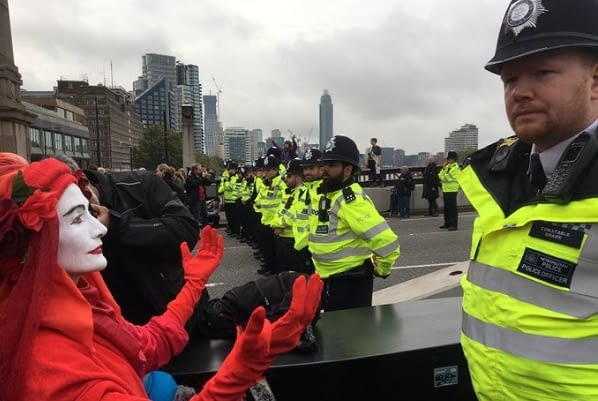 Extinction Rebellion (XR) will hold ten days of demonstrations across central London, which has previously bought misery and chaos to commuters.

XR who have previously been labelled as “soap dodger with dreadlocks” are only allowed to protest off main roads at Parliament Square Gardens between 8am and 7pm on Tuesday, the Metropolitan Police have confirmed.

Despite the Met imposing these conditions, the group are planning marches across several landmarks in London and will then move to Parliament Square and Trafalgar Square.

XR are planning various stunts which includes a “theatrical” display which is aimed at highlighting “how the climate crisis is causing death.”

Previously Extinction Rebellion have been slammed for their antics as they are “just a field day.”

Met Police commander Jane Connors said, “Ahead of a number of planned environmental protests due to take place in central London tomorrow, we have decided to impose conditions under Section 12 and Section 14 of the Public Order Act (1986) on protesters looking to assemble, and those looking to go on a procession.

“The reason we have implemented these conditions is that we know these protests may result in serious disruption to local businesses, commuters and our communities and residents, which I will not tolerate.

“If you take part in tomorrow’s assembly or processions and knowingly fail to comply with these conditions, or incite others to fail to comply, you may commit an offence and may be liable to arrest.”

Over half of Brits won’t work for businesses that don’t...

How UK SMEs can make the transition to net-zero in...

SMEs need more government support to help them be greener