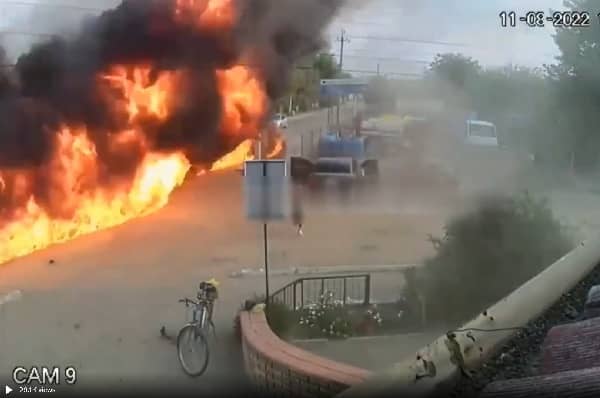 The former Russian President Dmitry Medvedev has issued an ominous warning to Ukraine on Monday, that the “first episode has been played” and there “will be others.”

On Monday morning the air raid sirens blasted out for six hours leaving those in the capital, Kyiv frightened with many dead and injured after at least 83 missiles were fired.

At around 3.30pm local time Reuters reported that the air raid sirens had restarted as Vladimir Putin is enacting his revenge on Ukraine and the Russian leader warned that there will a “harsh response” if Kyiv continues attacking Russia.

Russian missile strikes has left many cities without any water and power supplies in Kyiv, Kharkiv, Dnipro, Lviv, Sumy, Zaporizhzhia and Zhytomyr and there are many more places which have been affected.

On Saturday the Ukraine blew up a small section of the Kerch bridge which connects Russia to Crimea and the Kremlin then warned the attack is a “declaration of war without rules” and said there will be an “adequate response.”

Medvedev warned on Monday in his Telegram channel, “The first episode has been played. There will be others.

“And further. I will express my personal position. I can’t help but mention it now.

“The Ukrainian state in its current configuration with the Nazi political regime will pose a constant, direct and clear threat to Russia.

“Therefore, in addition to protecting our people and protecting the borders of the country, the goal of our future actions, in my opinion, should be the complete dismantling of the political regime of Ukraine.”

Several missile strikes in the center of Kyiv. Burning cars with people who were commuting to work. The strike was deliberately carried out during rush hour on a busy street to inflict maximum losses and intimidate. A pure act of terrorism. pic.twitter.com/KaOwUSMZio

Putin held a security council meeting in St Petersburg and said that Ukraine has now “practically put itself on the same plane as international terrorist formations.”

The Russian leader added that Russia conducted a “mass strike with long-range, high-precision weaponry” against “energy, military command and communications facilities of Ukraine,” on Monday morning.

Putin then warned that if the Ukrainian government and their forces continue their “attacks continue against Russia, the response will be harsh.

“The responses will be of the same scale as the threats to Russia.

“In the event of further attempts to carry out terrorist acts on our territory, Russia’s response will be harsh.”

Dmytro Kuleba tweeted in response, “No, Putin was not ‘provoked’ to unleash missile terror by ‘Crimea Bridge’.

“Russia had been constantly hitting Ukraine with missiles before the bridge, too.

He added, “This nonsense about Putin being ‘provoked’ must stop.

“He does not need anything to ‘provoke’ him in order to commit heinous crimes.

“I ask international media to stop shifting the blame on the victim of aggression by suggesting that Putin ‘responds’ or is being ‘provoked’.”